Casino developers to soon be able to roll the dice in

October 01, 2012 | 15:06
Tweet Email Print
A new decree draft on casinos is expected to open the door for the once discouraged gambling industry in Vietnam. 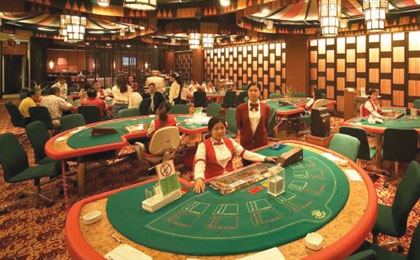 The Ministry of Finance (MoF) two weeks ago released a decree draft on investors developing casinos in Vietnam as long an integrated resort was built at total investment capital of at least $4 billion. Furthermore, the investor must have 10 years casino industry experience.

The MoF is now seeking comments from experts and businesses for this decree before submitting it to the prime minister for approval. However, the draft is a signal indicating that the gambling industry is likely to be developed legally in Vietnam.

“We are very pleased that the government of Vietnam has created a draft regulatory framework to ensure the highest standards, and to enable world class operators to bring all the benefits of increased tourism, job creation, career development and tax revenue to Vietnam.

ACDL is now constructing the first resort in Ho Tram Strip, MGM Grand Ho Tram, which is expected to be launched in the first quarter of 2013. It includes two hotels, a 13,600 square metre gaming entertainment area with 90 live table games and 500 electronic gaming machines, a world-class conference facilities, a wide variety of recreational activities and pool and beach facilities.

“When it comes to world class operators such as MGM Resorts and Pinnacle Entertainment, they are licenced globally, by many and varied jurisdictions, all of which strive to ensure the highest standards for this industry.  As such, MGM and Pinnacle need a clear and appropriate regulatory structure in any new jurisdiction where they might operate,” said Nathan.

Since 1992 when gambling limitedly allowed for the first time in the country, Vietnam has only one recognised casino in Do Son, Haiphong. Meanwhile, the country also licensed 50 gambling facilities nationwide, but just recognised them under the name of “prize-wining electronic gaming” facilities.

According to the MoF, if this decree were approved, it would be the first legal framework regulating casino business in Vietnam. It expects the gambling industry could spur the tourism industry, create jobs and contribute significantly to the state budget.

From 1992 till now, the total revenue from prize-winning electronic games business is estimated to reach about $72 million per year and created around 40-1,000 jobs for each gaming spot and contributed to the budget at the average level of $11.5 million per year, according to the ministry.

While Asia is drawing the attention of casino companies, Vietnam in particular is considered as among the most attractive place. Gambling operators are trying to encourage the Vietnamese authorities to allow integrated gambling-and-convention resorts in the country. The Las Vegas Sands Corporation is proposing to build integrated resorts with casinos in Ho Chi Minh City and Hanoi.

“Our interest in Vietnam remains very strong. We have spent a number of years working with people in Vietnam to help them understand what an integrated resort is about, what we as investors will bring to Vietnam and to the Vietnamese people,” said George Tanasijevich, managing director of global development for Las Vegas Sands Corporation.