Hanoi - Samsung Vietnam plans to expand its investment in Vietnam by setting up a research and development (R&D) centre, strengthening cooperation with domestic enterprises, and taking part in public infrastructure projects, its General Director Choi Joo Ho has said.

In an interview with “Tuoi tre” (Youth) newspaper, Choi said Samsung launched the construction of a new R&D centre in Hanoi in March last year, which is scheduled for completion in December 2022.

This is Samsung Electronics’ first R&D centre outside of the Republic of Korea and the largest of its kind by a foreign-invested enterprise in Vietnam, Choi said.

Vietnam is not only an important global production hub but also a strategic destination in Samsung’s R&D activities, he added.

Looking back on 2020, Choi said it was a memorable year for Samsung. Due to the COVID-19 pandemic, it suffered a fall in exports in the first half before recovering in the second half. In the year as a whole, it posted some 57 billion USD in export revenue, a little below its target of 60 billion USD but a positive result amid the pandemic.

He said that, in 2021, the company will continue to strictly implement COVID-19 prevention and control measures set by the Vietnamese Government and the Samsung Group, thus completing the twin target of ensuring safety for the company and maintaining production stability while fulfilling its export goals.

Regarding the movement of multinational groups in global supply chains to Vietnam, Choi held that Vietnam’s advantages in abundant skilled workers, stable socio-political situation, smooth investment environment, diverse infrastructure networks, and effective and successful pandemic prevention and control measures have had a positive impact on such movements.

Samsung is now operating six factories in Vietnam, with about 130,000 employees. According to Choi, since the pandemic broke out Samsung Vietnam has abided by pandemic prevention and control regulations defined by the Vietnamese Government and Samsung has applied prevention principles in factories worldwide.

Noting that Vietnam has won global praise for its fight against COVID-19, Choi believed it will continue to successfully control the current outbreak and become a global model in the effort. 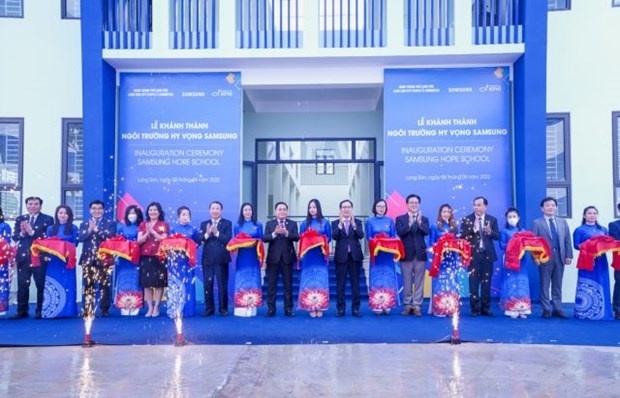