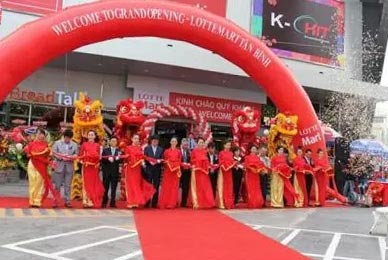 Lotte Mart Tan Binh opened on December 18 occupying 8,500 square metres over two floors. The new supermarket will offer over 30, 000 products, in which 90-95 per cent is Vietnamese.

In October 2012, Lotte Mart bought out local partner Minh Van to become a wholly foreign-invested enterprise. The retailer has announced its goal of opening 60 shopping centres and supermarkets throughout the country by 2020.

By entering the market early, the company believed that it would be able to select the best strategic locations in Vietnam’s marketplace, Hong Won Sik, general director of Lotte Mart Vietnam told VIR.

Lotte Mart was founded in 1998 in South Korea. It has more than 243 trade centres, both at home and in China, Indonesia and Vietnam.