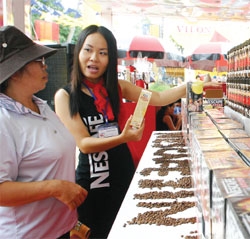 Thai Hoa Vietnam Group chairman and general director Nguyen Van An said a number of South Korean and Japan investors were eying up investment opportunities at the company’s $32.5 million coffee processing complex in the Central Highlands province of Lam Dong.

Thai Hoa, known as Vietnam’s leading private coffee firm, is currently aiming to mobilise more investment capital for the complex where a number of coffee processing facilities are already operational.

An said a group of South Korean investors were working with Thai Hoa on a project to plant 300 hectares of coffee trees.

Development of the plant was licenced in late 2010 and work has just begun with the completion date set for 2013. The new plant will  be able to process  46,000 tonnes of coffee beans for local consumption and export a year and employ 200 local workers, while generating employment for tens of thousands of coffee farmers.

“Many of them are boosting their investments into Vietnam,” Tu said. Five of the 10 biggest coffee traders in the world had penetrated Vietnam’s coffee market in the form of joint ventures or wholly foreign-invested companies, according to Vicofa.  These firms include Dak Man Coffee Processing Export Joint Venture Company, the Netherlands’ Nedcoffee and Olam.

Dak Lak is home to Vietnam’s largest coffee growing areas and Ngon’s plant is one of the first foreign instant coffee processing projects in the province.

Licenced in early 2009, the 24ha European-technology project will source all of its coffee materials in Vietnam. The plant will churn out 10,000 tonnes of high-quality coffee per year and is expected to come online at the end of this year. The plant’s revenue will be $27 million for the first year of operation and $40.5 million by 2014.

The 5.3ha plant has 500 local workers and can pump out 4,000 tonnes annually and the output will be doubled by 2012.  Olam now operates six coffee and spice processing factories in Vietnam.