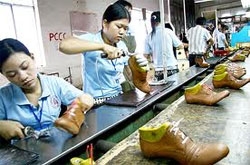 “The price of exported rice soared one month ago due to scarce supply. However, competition from rice exporting countries like India has tumbled the world price, hurting Vietnam’s rice exports,” said Bien.

According to Vietnamese trade counselor in Japan Vu Van Trung, the image of made-in-Vietnam goods in Japanese market was stained due to a group of small firms having poor knowledge about the Japanese market.

“These firms will struggle to survive in 2012,” said Trung.

In respect to next year’s exports, Trung confirmed Japan would have tremendous demand for import in 2012 to resume production and rebuild areas which were hardly hit by disastrous earthquake and tsunami in early 2011.

Japan is loosening protectionism towards imported agricultural products and shifting into importing products from other countries rather than China on the back of worsening Chinese products’ comparative advantages due to rising labour cost and quality problems in this country.

“Vietnamese export firms need to make the most of the Vietnam-Japan economic partnership agreement, effective from October 2009, which saw 84.6 per cent of Vietnamese exports to Japan become tax free during 10 years since the enforcement, paving the way for the country’s exports to carve a niche in the Japanese market,” Trung added.

Vietnam trade office in the US’s minister-counselor Dao Tran Nhan gave a warning that imported products into the US market must abide by strict regulations under the Food Safety Modernisation Act (FSMA) with concrete requirements on product origin tracing and record filling of processors and manufacturers.

Parallel to advantageous products like agricultural and seafood items and raw materials, in the coming period Vietnamese firms must jump into the global supply chain of products like electronic, auto and motorbike components and precise engineering items to bolster export value, according to the industry and trade departments in southern Dong Nai and Binh Duong provinces.