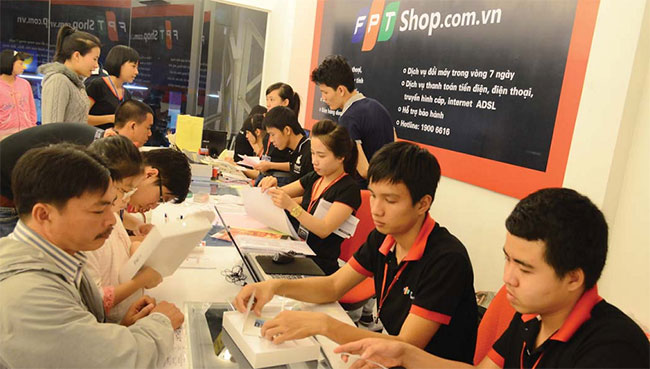 In a recent interview with VIR, FPT deputy general director Nguyen The Phuong said the company is looking for investors with strong financial capacities and international business and governance experience to cooperate on the development of these two businesses.

“These two recently received a lot of attention from foreign investors,” he added.

FPT has just signed an agreement with the consortium of VietCapital and Nomura Securities which appoints the consortium as a consultant in the sale of shares in FPT’s retail and distribution arms.

According to Phuong, FPT is decreasing its holding in these two companies to focus on its core business lines, information technology and telecommunications, in order to seize the big opportunities currently on their plate. He noted that the company targets to complete the sales in 2016.

Recently, a rumour has been flying around that Mobile World Group (MWG) is going to be the new owner of FPT Shop. The grounds for this speculation were CEO Tran Kinh Doanh’s statement at MWG’s annual shareholders’ meeting in February that MWG is considering buying a retail chain to increase the number of thegioididong stores by 100 in 2016.

However, there is also ample speculation that a Japanese investor is going to stand behind FPT Shop and FPT Trading. The reason behind these rumours was that FPT is currently doing a lot of business in Japan. Moreover, Nomura is a Japanese company, setting new light to their agreement with FPT.

Japanese investors have been conducting a lot of mergers and acquisitions deals in Vietnam in recent years. They are also interested in the Vietnamese retail market. A prime example is Aeon. Not only is the company building its own malls here, it is also buying shares in Vietnamese supermarket chains Citimart and Fivimart.

By By Nguyen Duc