February 23, 2016 | 12:47
Tweet Email Print
The Vietnamese government and the World Bank today launched the Vietnam 2035 report: Toward Prosperity, Creativity, Equity and Democracy, which recommends steps to help turn Vietnam into a prosperous, creative upper middle income country with a capable and accountable state and a clean environment, as well as an equitable and inclusive society over the next 20 years. 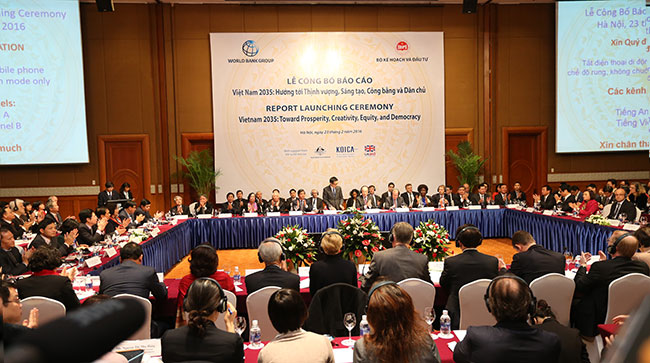 The report recognises six key transformations that will help Vietnam achieve its goals for 2035: (1) to enable economic modernisation with a competitive private sector firmly in the lead; (2) to improve the country’s technological and innovative capacity; (3) to reshape urban policies and investments for more dynamic cities and urban centres ; (4) to chart an environmentally sustainable development path with increasing adaptation and resilience to changing climate patterns; (5) to promote equality and inclusion among marginalised groups for the development of a harmonious middle-class society; and (6) to establish a modern rule of law state and a democratic society. 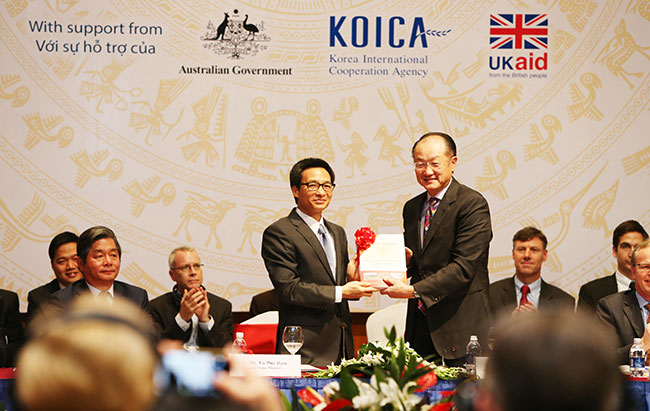 “In the last 30 years, Vietnam has become one of the world’s great development success stories, rising form the ranks of the poorest countries. On the strength of a nearly 7 per cent average growth rate and targeted government policies, tens of millions of people have lifted themselves out of extreme poverty,” said World Bank Group’s president Jim Yong Kim.

Kim said that the Vietnam 2035 report, with inputs from international and Vietnamese experts, reflects Vietnam’s aspirations of becoming a modern, industrialised nations within a generation.

“Improvements in productivity, environmental protection and economic innovation can help Vietnam maintain high levels of growth. It will be critically important to remove barriers that exclude marginalised groups and deliver quality public services to an aging and urbanising middle-class,” he said. “The report recommends that Vietnam build modern and more transparent institutions – those steps willl help the country meet its ambitious goals.”

The agreement to work on the joint report was made in Hanoi by Prime Minister Nguyen Tan Dung and Kim in July 2014. It was produced by a joint team from the Ministry of Planning and Investment, the World Bank Group and external experts from Vietnam.

“Vietnam is a success story of the world in economic development and poverty reduction. But now Vietnam is still a poor country. We’re not satisified with what we have achieved, especially when comparing ourselves to other countries with similar conditions,” said Minister of Planning and Investment Bui Quang Vinh.

According to Vinh, it is urgent that Vietnam reforms itself and grows now as the country only has about ten years left in the golden population period, which started in 1970 and is going to stop in 2025.

“Our country is at a turning point of reform and development. We face significant opportunities, but also big challenges. To reach our goal of becoming a prosperous, creative, equal and democratic Vietnam, our only choice is to implement the reforms recommended by the Vietnam 2035 report. Without these reforms it wil be hard for us to avoid falling into the middle income trap and lagging behind. We see these reforms as s continuation of the historic Doi Moi reform process and we believe current and future generations of Vietnamese people have the will, determination, courage and capacity to successfully implement these changes,” Vinh said.

According to the report, reach the ambitious goal of upper-middle-income status would require Vietnam to grow at least 7 per cent per year, raising the average income level to over $18,000 by 2035, compared with $2,052 in 2014.

The full report can be downloaded from link: Vietnam2035