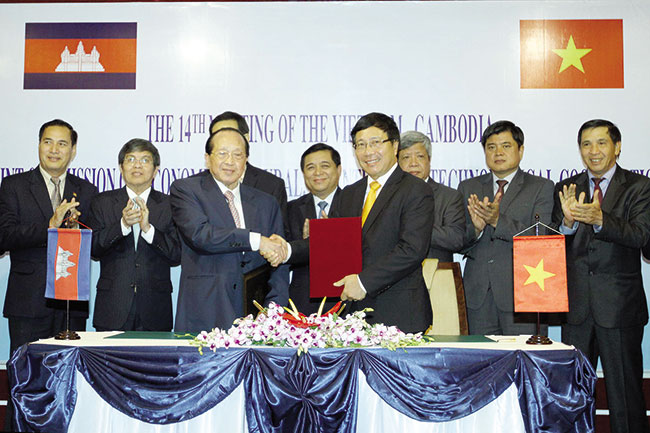 The latest round of meetings brought resounding success

This is the outcome of the 14th meeting of the Vietnam-Cambodia Joint Committee convened in Ho Chi Minh City last week to discuss bilateral co-operation across economics, culture, science, and technology.

Hailing past efforts on border demarcation, both sides reiterated their determination to conclude the task soon. They also emphasised the importance of protecting the Mekong river by boosting cooperation with multilateral bodies like the Greater Mekong Sub-Region, the Mekong River Commission, and the Cambodia-Laos-Vietnam Development Triangle.

Namhong also praised the big economic achievements between Vietnam and Cambodia in the past few years. By late 2014, Vietnam had 167 valid investment projects in Cambodia, registered at $3.46 billion. Vietnam’s investment in Cambodia hit $28 million in this year’s first half, making it the sixth largest investor in Cambodia.

According to Nguyen Chi Dung, Deputy Minister of Planning and Investment, Vietnam and Cambodia are committed to speeding up the negotiation of some agreements, concluding negotiations of an agreement on double taxation avoidance, and implementing a deal for investment promotion and protection. These agreements, along with a cross-border trade deal, are expected to spur bilateral trade in the near future.

The two nations will also co-ordinate their legal frameworks on investment to encourage Vietnamese firms to invest in Cambodia. They also agreed to develop concrete mechanisms and policies to address obstacles for investors so as to promote investments in each country.

Dung noted that the meeting helped the two nations cement links with each other in order to tap into the lucrative benefits induced by deeper economic integration in the region. -“Cambodia is calling for investment in agriculture, crops, mining, energy, and service sectors, which suit Vietnamese enterprises’ demand. Vietnamese companies specialised in these sectors are greatly encouraged to invest in Cambodia,” he added.

Both deputy prime ministers believed that the 14th meeting’s results laid solid foundations for promoting Vietnamese and Cambodian co-operation to a higher level in the future. They concluded the meeting with the signing of a memorandum of understanding, scheduling the 15th joint committee meeting for 2015, hosted by Cambodia.