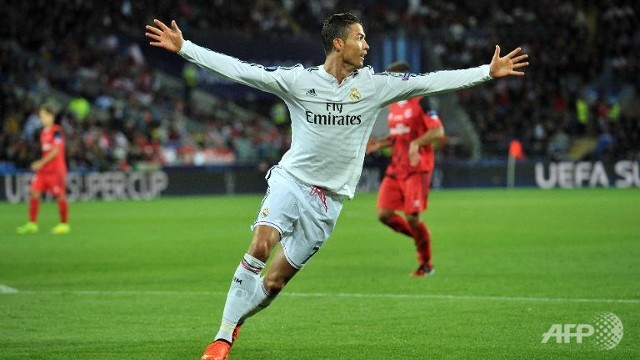 World Cup stars Kroos and Rodriguez were making their Madrid debuts, while Bale was returning to his hometown, but it was Ronaldo, characteristically, who hogged the spotlight with a brace in the Welsh capital. The Portugal captain claimed a 30th-minute opener from Bale's cross and then slammed home a second goal shortly after half-time to earn the European champions what could be the first of six trophies this season.

Victory gave Madrid only their second Super Cup, after a maiden triumph in 2002, and enabled Carlo Ancelotti's side to avenge a costly 2-1 loss at the hands of Europa League winners Sevilla in La Liga last season.

While Ancelotti named both Kroos and Rodriguez in his starting XI, Sevilla left-back Alberto Moreno was omitted from his side's match-day squad amid reports he is on the verge of joining Liverpool.

With Kroos sitting in front of the back four and Rodriguez to his left in a 4-3-3 shape, Madrid quickly assumed control of the game at the Cardiff City Stadium. Bale and then Ronaldo, with a free-kick, saw efforts deflected narrowly off-target, before Bale's outside-of-the-foot volley from a Rodriguez left-wing cross was blocked by a defender.

A misplaced pass by Daniel Carvajal gave Sevilla winger Vitolo a chance to shoot at goal, obliging Iker Casillas to save at his near post, but Madrid were soon back on the front foot. After Federico Fazio headed a deflected cross from Fabio Coentrao off his own line and Sevilla goalkeeper Beto blocked sharply from Ronaldo, Madrid's lavishly assembled forward line clicked into gear for what their fans hope will be the first goal of many.

When a Sevilla attack broke down, Ronaldo flashed a pass inside to Rodriguez, who immediately sprayed the ball wide to Bale on the left flank. The Cardiff-born Welshman took a touch before sending a fine, searching cross towards the back post, where Ronaldo powered in to volley home. Moments later, a shanked clearance from Rodriguez meant that Casillas had to save from Daniel Carrico, but Madrid were good value for their half-time lead.

Ronaldo doubled his side's lead, and his personal tally, four minutes into the second period, gathering a pass from Karim Benzema and walloping a left-foot shot past international colleague Beto.

Beto prevented Madrid from extending their lead by clawing away a shot from Benzema and then brilliantly blocking a crisp strike by Colombia star Rodriguez, who made way for Isco with 18 minutes to play. Beto also produced a late flying save to thwart Bale, who was unable to crown his return to Cardiff with a goal, but who has now won three titles in his first 12 months at Madrid.