Ocean Dune golf members up in arms over proposed tear down 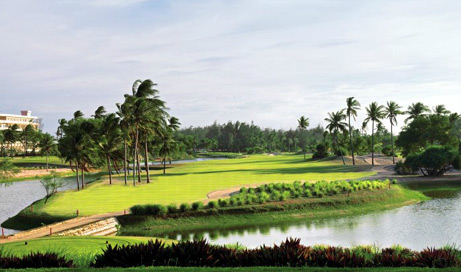 
In early March 2014, to stop continuous losses it has sustained for the past 20 years, Rang Dong Group, the owner of Ocean Dunes, issued a message to its members that the golf course would close early this month.

The message included plans to resolve membership fees and benefits.

All member services would be entirely inherited by the course.

In cases the members having both Ocean Dunes and Golf Sea Links they can combine card validity or transfer one card to other people without paying transfer fees.

The group is openly negotiating with Ocean Dunes members to ensure their best interests.

Some members, however, are not satisfied with Rang Dong’s solution, saying that they are being disregarded and have not been heard by the group.

In the middle of last week, a group of Ocean Dunes members held a meeting where they reached a consensus on hiring a foreign law firm to protect their interests if the urban area plan goes forward.

Another member, Le Quang Liem, wants Rang Dong to pay $25,000 compensation to club members, as he is not interested in playing golf at Sea Links.

Jeff Puchalski, another member, said a proposal is being drafted to send to authorities asking them to uphold the members’ rights.

Chairman of Rang Dong Nguyen Van Dong, said the group was looking to resolve the issue in a constructive way. He added that the group greatly regrets closing the course, but that it has become necessary due to the group’s sustained losses.

In terms of satisfying Ocean Dunes’ members, Dong said that of nearly 189, nearly half couldn’t be contacted and another 50 had agreed to shift their memberships to Sea Links or receive compensation.

The proposal to change the golf course to an urban area will fall on the provincial Party committee’s desk this month. If green-lighted, the provincial people’s committee will pass the proposal forward to the prime minister and higher authorities for final approval.

By By Ngoc Tuan