IFC builds for a greener future 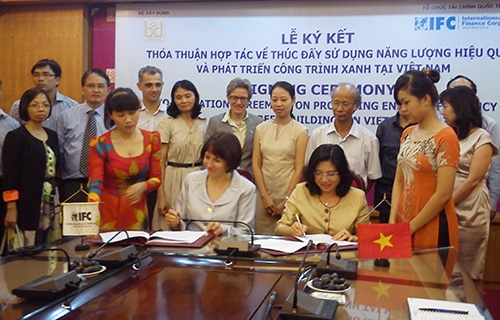 The Investment Climate Advisory Services of the World Bank group has just inked a deal with the Ministry of Construction (MoC) a deal to improve energy efficiency in buildings to reduce energy costs and greenhouse-gas emissions.

Under the deal, the corporation (IFC) will help the MoC develop procedures and capacity to promote the Building Energy Efficiency Code. The code took effect in 2005 but has not been widely implemented due to a lack of specific guidance and enforcement. Last year, IFC clinched a memorandum of understanding (MoU) with the Vietnamese government to support it in revising the code, which is expected to be released later this year.

IFC will also help the MoC develop user guides, technical checklists for the code implementation, and training materials on energy efficiency in buildings. The programme, to be implemented in between 2013 and 2017, aims to save as much as 15 per cent of energy consumption per floor square metre in new buildings.

A World Bank report shows that Vietnam’s electricity consumption jumped fourfold between 1998-2008, contributing considerably to carbon dioxide emissions, which augmented at an estimated 12 per cent, per year. Promoting energy efficiency in the building sector will help Vietnam achieve its target of 8-10 per cent reduction in greenhouse-gas emissions from 2011 to 2020.

IFC has also been supporting the Ministry of Industry and Trade in promoting energy efficiency in the industrial sectors and facilitating local financial institutions to finance energy-efficiency and cleaner production projects, which will help enterprises reduce energy costs and raise their productivity and environmental performance