Agribank teams up with Thai bank

March 21, 2012 | 11:05 (0) user say
Tweet Email Print
Thailand’s Kasikornbank has signed a service co-operation agreement with Vietnam Bank for Agriculture and Rural Development (Agribank), in its bid to extend its presence across ASEAN countries ahead of the regional single market. 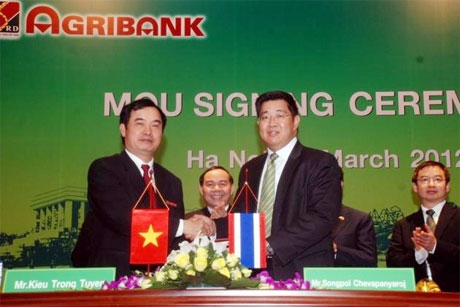 This agreement is aimed at promoting trade and investment of both nations in preparation for the launch of the ASEAN Economic Community.

It was signed in Vietnam by Songpol Chevapanyaroj, executive vice president of Kasikornbank, and Kieu Trong Tuyen, deputy general director in charge of Agribank’s Board of Management.

“Vietnam is one of the top priority markets, where we must establish a strong and extensive network to accommodate Thai investment in the country, largely in the manufacturing sector,” said Songpol.

Cheaper labour costs now attract a large number of Thai companies to Vietnam. And trade and investment value is expected to rise when ASEAN becomes a single market in 2015.

In 2011, KBank forged a partnership with Vietnam Joint Stock Commercial Bank for Industry and Trade (VietinBank), which showed the highest earnings last year thanks to its strength in overseas transactions.

Agribank, entirely owned by the Government, owns the largest branch network in Vietnam with over 2,300 branches.

KBank has so far established partnerships with banks in Indonesia, Singapore, Laos and Vietnam.