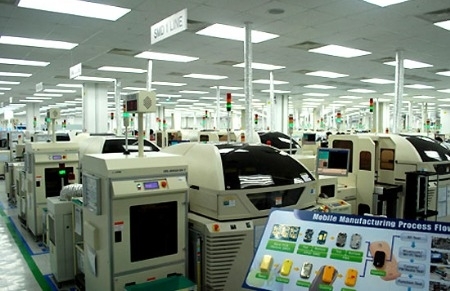 This was driven by stronger production from foreign invested enterpirses (FIEs) in the country, according to the General Statistics Office (GSO).

The Vietnam operations of global giants such as Samsung, Intel and Canon helped generate the $800 million trade surplus in January and almost $900 million in February.

Vietnam typically records a trade deficit early in the year. A high trade surplus was not always a positive factor, especially when it mainly came from FIEs instead of domestic firms, some economists said.

Exports were strong in such goods as textile and garments and electronic products like handsets, computers and components, according to GSO.

If crude oil was included in the total, FIEs posted  $12.2 billion in the export value and $9.2 billion in the import value, resulting in a trade surplus of $2.9 billion during the first two months. But, domestic enterprises incurred a $1.3 billion trade deficit when it spent over $8 billion on imports versus $6.7 billion gained from exports.

During  January and February 2013, Vietnam raked in $2.68 billion from exporting handsets and spare parts, $1.48 billion from electronic products, computers and components, and $2.84 billion from textile and garments, driven by FIEs.

“In fact, giant businesses such as Samsung, Canon and Intel are the key factor behind FIEs’ robust export value. Hence, if we succeeded in securing more global firms to Vietnam, it could bolster the country’s export performance,” Nam said.

Vietnam previously experienced a trade surplus in the first two months of 2009, but that figure involved the uncharacteristic re-export of gold worth $1.45 billion. Otherwises, the period would have marked another trade deficit.

When commenting on 2012’s trade surplus, Minister of Planning and Investment Bui Quang Vinh underscored this was a matter of big concerns since the trade surplus showed signs of production standstill.