October 27, 2019 | 10:17 (0) user say
Tweet Email Print
Californian officials warned Saturday (Oct 26) that "extreme" wind conditions were set to fan wildfires across the north of the US state as residents were ordered to evacuate and millions faced power cuts.

About 50,000 people were ordered to flee their homes in Sonoma county, north of San Francisco, as the Kincade Fire spread to cover 25,455 acres (10,300 hectares) after breaking out on Wednesday.

The blaze, which is burning in remote steep terrain, threatens 23,500 structures and had already forced the evacuation of the small community of Geyserville and nearby vineyard operations.

"This is definitely an event that we're calling historic and extreme," David King, meteorologist for the US National Weather Service, told The Los Angeles Times.

"What's making this event really substantial ... is the amount of time that these winds are going to remain."

Hot, intense winds were forecast to pick up on Saturday and last into Monday across the San Francisco Bay area, with the affected areas put on a red flag warning indicating high risk level.

"The weather event could be the most powerful in California in decades," PG&E said, with dry northeast winds predicted to gust up to 70 miles per hour (112 kmh).

"PG&E will need to turn off power for safety several hours before the potentially damaging winds arrive," it added.

"Winds of this magnitude pose a higher risk of damage and sparks on the electric system and rapid wildfire spread."

About 2,000 firefighters battled the Kincade Fire, which is only 10 per cent contained, according to the California Department of Forestry and Protection.

"We are announcing an evacuation of approximately 50,000 people," Mark Essick, sheriff for Sonoma county, told reporters. "This fire is very dangerous."

"I can't explain it," 70-year-old Tina Tavares, who was evacuated from her Geyserville home, told the San Francisco Chronicle.

"It's like you're in a bad earthquake, the ground is opening up ... and you're seeing it and don't know what to do."

PG&E has come under fierce scrutiny after power was earlier shut down to nearly 28,000 customers in Sonoma county this week, but some high-voltage transmission lines were still operating when the fire broke out.

The same type of lines was responsible for California's deadliest wildfire ever - last year's Camp Fire, which killed 86 people.

PG&E, which filed for bankruptcy protection earlier this year, has been blamed for several other fires in the state in recent years.

California Governor Gavin Newsom declared a state of emergency and hit out at the company on Friday, saying it had put "profits over the people of California for too long."

He said it was "infuriating beyond words" that a state such as California had to endure blackouts.

"It's about dog-eat-dog capitalism meeting climate change," he said, referring to PG&E. "It's a story about greed, and they need to be held accountable."

Farther south in California, most evacuation orders were lifted after tens of thousands of residents left their homes near Santa Clarita, just north of Los Angeles, due to the so-called Tick Fire that scorched over 4,000 acres.

The blaze forced the shutdown of all schools in the area as well as a major freeway, creating traffic chaos for commuters.

Some 1,325 firefighters backed by air tankers and helicopters had battled the flames close to densely packed communities.

Nine structures were destroyed, though no injuries were reported.

Wildfires also erupted over the border in Mexico's Baja California state, where local civil protection authorities said on Friday that three people had been killed and over 150 homes destroyed.

The state's director of civil protection, Antonio Rosquillas, said that the municipality of Tecate, bordering the United States, was worst hit. 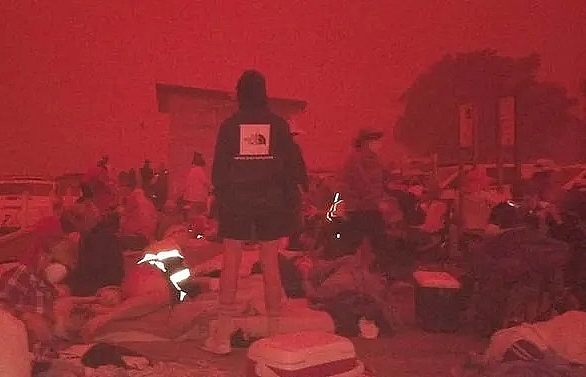