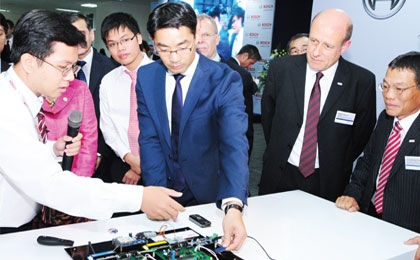 Kumho Asiana Group has joined Bosch to follow Samsung’s footsteps in requesting the government to apply tax incentives to  their planned investment expansion. Many firms are waiting with baited breath to see what the government’s response will  be.

In September, Samsung received generous tax incentives for its Vietnam-based investment expansion from $670 million to $1.5 billion after a two year wait.

“The [Kumho representatives] said they should be granted incentives like Samsung because they also significantly contribute to Vietnam’s economic development,” said the source.

However, he said the provincial authorities could not satisfy this request because the Law on Corporation Income Tax regulates investors cannot enjoy tax incentives for expanding an investment project.

“This month, top officers of Kumho Asiana Group will arrive in Vietnam to meet the government’s high-ranking representatives to discuss this proposal,” added the source.

Kumho Asiana Group chairman Sam-Koo Park in his visit to Vietnam four months ago announced that Kumho Tire – the group’s manufacturing subsidiary – would invest a further $100 million in Vietnam to expand its output capacity to 5.6 million units per year from 3.15 million units. This will rise Kumho’s investment to $300 million in this factory.

Park said Kumho had been preparing for this project and would start this year and further expand the plant until it reached 13 million units of annual output capacity. However, this schedule could be delayed as the investor must wait for tax incentive approval from the Vietnamese government.

Kumho is not alone when asking for such incentives. Germany’s Robert Bosch is also in the same boat with  its investment expansion plan of its factory in southern Dong Nai province.

The German firm has invested €80 million, or $103.7 million at current exchange rate, in this factory and could raise total investment to €230 million or $298.3 million.

Vo Quang Hue, managing director of Robert Bosch Vietnam, said incentives were an important factor for Robert Bosch to expand investment in Vietnam, which it considered a manufacturing hub for South East Asia.