November 02, 2020 | 17:00
Tweet Email Print
National Assembly (NA) Chairwoman Nguyen Thi Kim Ngan held talks with Speaker of the NA of the Republic of Korea (RoK) Park Byeong-seug in Hanoi on November 2, expressing the willingness to work with the RoK side to foster the countries’ strategic cooperative partnership.

Hanoi – National Assembly (NA) Chairwoman Nguyen Thi Kim Ngan held talks with Speaker of the NA of the Republic of Korea (RoK) Park Byeong-seug in Hanoi on November 2, expressing the willingness to work with the RoK side to foster the countries’ strategic cooperative partnership.

Welcoming Park on his official visit to Vietnam from October 31 to November 4, the host said the trip is a clear demonstration of the two countries’ success in the COVID-19 fight, as well as their leaders’ high political trust.

The Vietnamese parliament is ready to join hands with him and the RoK counterpart to further enhance the friendship and cooperation between the two NAs, thereby contributing to the countries’ strategic cooperative partnership, she said.

She appreciated the RoK Government’s presentation of the 300,000 USD aid to the Central Steering Committee for Natural Disaster Prevention and Control to help Vietnam address heavy consequences caused by recent storms and floods in the central region.

Speaker Park, the first foreign parliamentary leader to visit Vietnam since COVID-19 broke out earlier this year, conveyed President Moon Jae-in’s sympathies on flood-triggered loss of life and property to his host.

He held that Vietnam and the RoK have obtained numerous achievements in bilateral relations since their diplomatic ties were set up in 1992, noting parliamentary cooperation has been developing strongly with frequent mutual visits by NA leaders.

Amid the COVID-19 pandemic, there remain many aspects of cooperation for strengthening so as to foster economic links and people-to-people exchange, including the facilitation of the entry of each other’s experts and entrepreneurs, according to him.

As both countries have managed to contain COVID-19, the RoK wishes to boost special entry procedures for each other’s citizens in tandem with maintaining the coronavirus prevention, he said.

Chairwoman Ngan noted the Vietnam-RoK strategic cooperative partnership has been thriving and becoming increasingly substantive, adding that the two countries have become partners of leading importance to each other in various spheres.

Affirming that Vietnam attaches great importance to the development of the friendship and cooperation with the RoK, she said it is ready to work with the Northeast Asian nation to expand bilateral relations and develop cooperation between the two countries, as well as between the two NAs, in all fields.

She highlighted that despites complex developments of COVID-19, their economic partnership has been maintained with positive figures in terms of investment and trade.

The RoK remains the largest among the 136 countries and territories investing in Vietnam, with nearly 9,000 valid projects worth 70.2 billion USD. It currently ranks second in ODA provision for, trade with, and reception of workers from Vietnam. It is also one of the key sources of foreign tourists to the Southeast Asian country.

The host legislator pointed out the necessity to soon organise bilateral cooperation mechanisms, including the economic dialogue at the Deputy Prime Minister level and the inter-governmental committee for economic, scientific and technical cooperation, in an appropriate form and to assist their businesses to maintain economic activities.

She suggested both sides increase medical cooperation, especially in public health care, and asked the RoK to facilitate the entry of Vietnam’s agricultural products like dragon fruit, pork, chicken, and mango into its market.

The NA of the RoK will coordinate with the country’s Government to provide appropriate support for Vietnamese women married to RoK citizens, he noted, considering Vietnamese-RoK families as a precious asset in connecting their nations in the future.

At the meeting, Ngan said the Vietnamese NA supports the two governments’ cooperation in security-defence and promotion of the signing of mutual legal assistance agreements on civil and commercial matters to protect legitimate interests of citizens living in each other’s territories.

She welcomed the opening of the RoK’s Consulate General in Da Nang city, which she said will help reinforce ties between central localities of Vietnam and the RoK.

Regarding cooperation at international and regional forums, the Chairwoman applauded the RoK’s New Southern Policy which lays an emphasis on bolstering relations with ASEAN countries, with Vietnam being the focus.

Vietnam is willing to act as a bridge for strengthening multifaceted cooperation between the RoK and ASEAN countries, she affirmed.

As for the East Sea issue, both host and guest shared the view on the importance of maintaining peace, stability, security, safety and freedom of navigation and overflight in the waters, along with peacefully resolving disputes in line with international law, including the 1982 UN Convention on the Law of the Sea.

Reviewing the NAs’ relations, they said the two parliaments have cooperated well to contribute to the Vietnam-RoK strategic cooperative partnership.

Via parliamentary diplomacy, the NAs have helped enhance political trust and people-to-people exchange, expand and improve the effectiveness of cooperation in different fields, and share views on regional and international issues of common concern. They have also supported the two governments’ cooperation programmes and plans as well as the regional cooperation and connectivity frameworks that both countries promote, according to the leaders.

At the talks, the two sides agreed to maintain all-level meetings in flexible forms amid the COVID-19 pandemic and to create a favourable environment for concurrently fighting against the disease, boosting socio-economic development, and gradually bringing bilateral collaboration to normal.

They will further listen to opinions from Vietnamese and RoK citizens so as to monitor the implementation of and build policies and laws, thus creating a stable and optimal legal environment for citizens living in each other’s territories. Besides, they will also continue bringing into play the role of their parliamentary friendship groups.

Speaker Park said the countries will mark the 30th founding anniversary of diplomatic ties in 2022, when Vietnam and the RoK should elevate their cooperation as Vietnam is not only the key partner in his country’s New Southern Policy but also plays a crucial role in ASEAN.

He also thanked Vietnam for assisting RoK businesses to operate in the country. 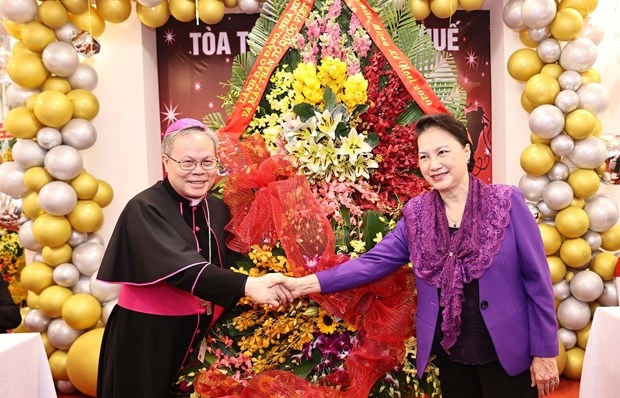 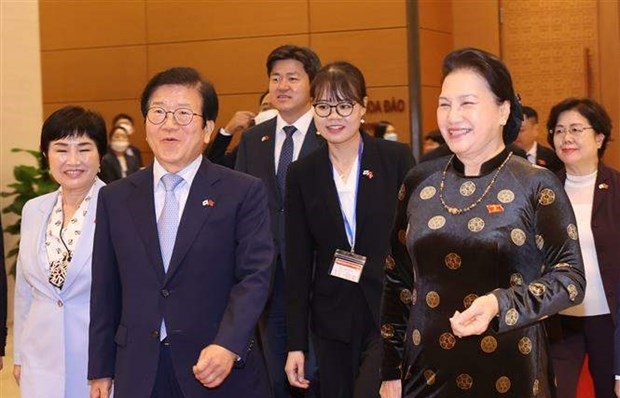 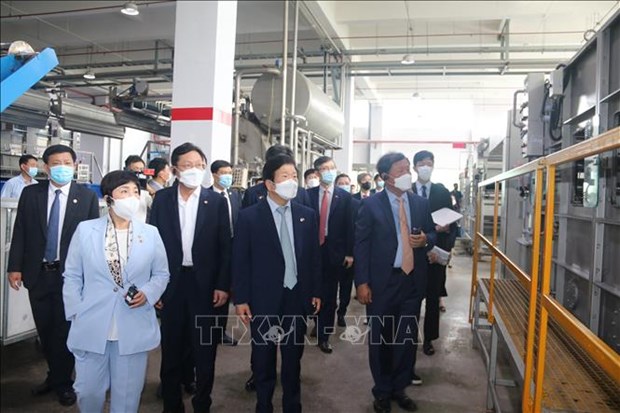 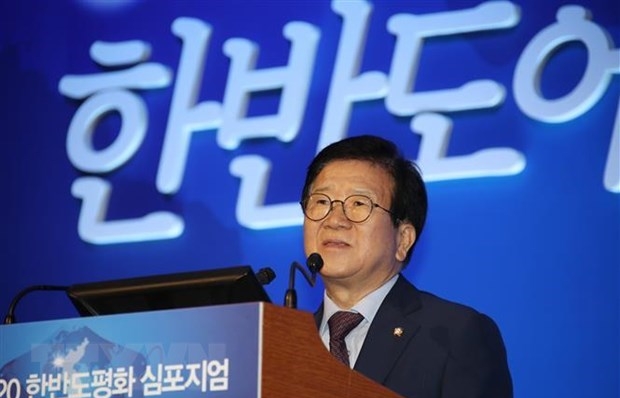 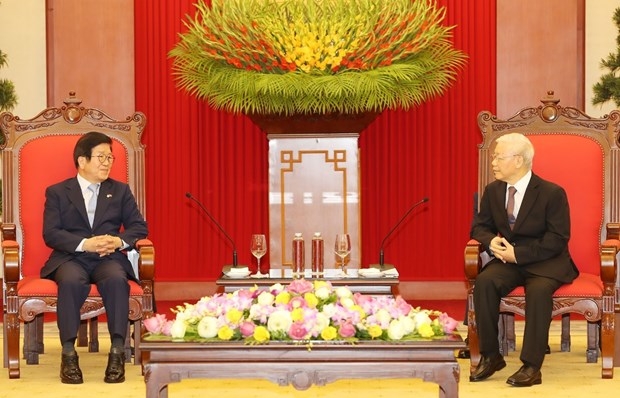 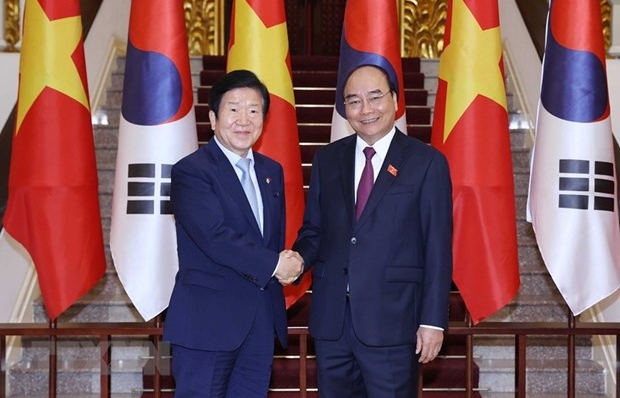