May 10, 2017 | 13:51 (0) user say
Tweet Email Print
The authorities of the central province of Quang Nam said that they would not propose the Ministry of Natural Resources and Environment to license Bong Mieu Gold Mining Company Ltd. (BMGMC), a subsidiary of Canadian company Besra Gold Inc., to exploit Bong Mieu gold mine again. 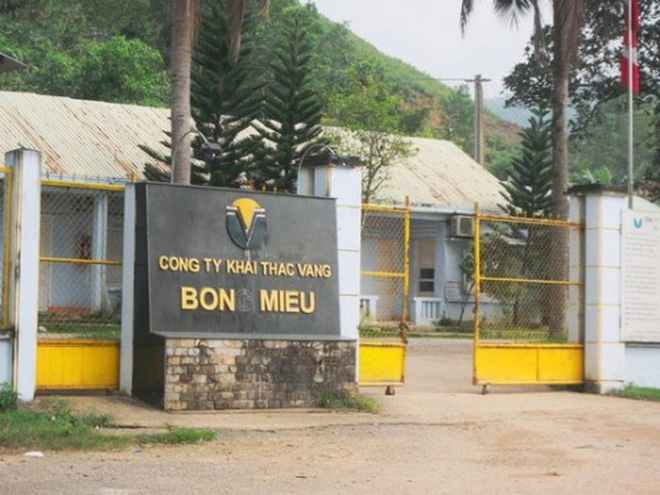 The license to exploit the gold mine that was earlier issued to Bong Mieu Gold Mining Company Ltd. (BMGMC) by the Ministry of Heavy Industries (now the Ministry of Industry and Trade) in 1997 expired on May 3, 2016. However, the company continued mining operations despite the authorities and related agencies’ repeated warnings.

The company submitted a request to the Department of Biology and Minerals asking for an extension, but was told that there is no basis to grant its request.

Throughout its operation, the company has incurred millions of dollars in tax debts and fines for late payment, as well as debts toward its business partners.

The committee said that the province had issued many policies to help the company solve its difficulties and restructure in order to restore operations again and earn an income in order to pay the tax arrears and fines to the government as well as the debts to equipment suppliers. However, the company refused to cooperate and was slow to build a restructuring plan, failing to pay its debts. Additionally, when the committee asked it to stop operations, it did not comply.

Therefore, at the recent meeting regarding BMGMC’s proposal, Toan said the committee would not propose the Ministry of Natural Resources and Environment to issue a new license.

“The Quang Nam People’s Committee asked that the company and Besra Gold Inc. proceed according to the law when its mining license expires, which means it has to protect unexploited resources in the area and carry out procedures to close the mine, as well as restore the environment and the land to their previous states,” Toan said.

Also in Quang Nam, Besra Gold Inc. received the license to exploit Phuoc Son mine in 1999.

On April 3, 2017, Besra Gold Inc announced that it has entered into an agreement to sell all of its existing interests in Vietnam to a new corporate entity to be established by former in-country senior managers Paul and David Seton, to assume existing trade creditor, tax, and remediation liabilities totalling over $25 million. The Vietnamese assets comprise the Bong Mieu and Phuoc Son mines in Quang Nam province and Besra Vietnam Limited, the in-country operating company.

Regarding the sale, Jon Morda, an independent director at Besra, said, “During negotiations to secure refinancing of the company, our investors had come to a very firm conclusion that they were not interested in taking on the Vietnamese assets with associated creditor and tax liabilities, risks, and the clear market antipathy to Vietnam. The significant unresolved licensing issues and remediation liabilities with the operations there and difficult regulatory environment were beyond the investors’ risk tolerance threshold. As Vietnam is likely to continue to present on-going challenges to regular production under a sensible and predictable fiscal regime, a decision was taken by the committee of independent directors to divest the Vietnamese assets.”

The agreement will be put to shareholders for approval at a meeting to be held on May 23, 2017. “Completion of the agreement will establish Besra as a gold exploration and development company with a focus on the highly prospective gold field situated at Bau in East Malaysia,” said the statement posted on the company’s website.

Vietnam has had a lot of troubles with Besra. It is unclear whether Malaysia would suffer through a similar vicissitudes as Vietnam if it licenses Besra to mine the Bau mine.