Lotte tower reaches for heavens to cement its big reputation

October 17, 2011 | 08:54
Tweet Email Print
Lotte Coralis Vietnam last week took a big step to see its Lotte Centre Hanoi climb to 65 stories. A huge amount of concrete was poured into the foundations with 17,030 cubic metres of cement provided by 2,433 concrete mixer trucks during a four-day period. 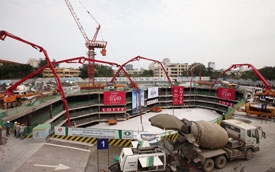 Also, 16 concrete pump trucks were onsite. Lee Jong Kook, president of Lotte Coralis Vietnam, said the cement would fortify the building’s strength to endure a 7.0 magnitude earthquake and strong winds. “This meaningful construction will be a milestone to raise construction technology in Vietnam regarding high strength concrete and concrete workers’ skills,” Lee said.

Lotte started construction in October 2009, with the $400 million project to cover 14,000 square metres. When finished, it will house more than 42,200sqm of department store space, 300 hotel rooms and 63,000sqm of office space. Serviced apartments are to take up about 40,000sqm and there is provision for 1,146 parking spaces.

When completed, the new Lotte tower will be the third highest in the country, behind the 72-storey Keangnam Hanoi Landmark Tower in Hanoi and Ho Chi Minh City’s Bitexco tower which has 68 storeys.

This project was originally set up by a joint venture between Luxembourg-based Coralis SA and Lohr Industrie in 2005. However, in 2008 the project was transferred to Lotte.

Lotte was established in 1965 in South Korea. Its main activities include retail, food and beverages, chemicals and construction as well as hotels and resorts. The company is the fifth biggest conglomerate in Korea and has a more than 50 per cent retail market share in that country.