December 09, 2014 | 14:11
Tweet Email Print
The National Committee for Traffic Safety said it will launch the model “Restaurants for the sake of traffic safety” in Hanoi, Da Nang City and Ho Chi Minh City in an effort to reduce traffic accidents caused by drivers under the influence of alcohol. 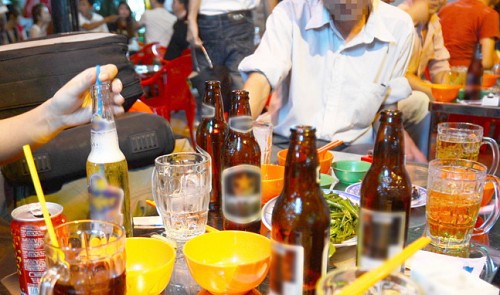 The model is characterized by a service in which eateries, bars and restaurants will arrange their staffs to take their drunken guests to their home while keeping their vehicles at these facilities, the committee said.

The new service, the first of its kind in Vietnam, will be piloted in the three locations in January 2015 in a bid to improve the traffic safety, especially during the coming Tet (Lunar New Year), which will fall on February 19, 2015.

This model will be deployed on the coordination between the committee and the Vietnam Beer Alcohol Beverage Association (VBA).

Accordingly, the two agencies will mobilize a number of large restaurants to take part in the model, in which they will stop selling beer or liquor to guests with signs of drunkenness or offer them assistance by keeping their vehicles at the eateries and arranging staff to take them home by taxi or by restaurant’s vehicles.

Restaurants taking part in the model will be trained and supported to offer the service to their guests, the committee said, adding that specific criteria for selection of eateries for the service and policies to support them will be made available soon.

Such a service has been applied successfully for years in many foreign countries, including China and South Korea, the committee said, adding that this service has contributed to reduce traffic accidents and create jobs to thousands of people in China.

Many eateries have shown the support to the new service, saying it will not only protect safety for drinkers and others but also ease worry of their wives during their drinking time.

Le Tu Thanh, the owner of H.P. restaurant on Quang Trung Street, Go Vap District, said he has prepared for the service.

Thanh said he has discussed a cooperation plan with a number of taxis in taking his guests home when necessary. He added that he would also use his car for the service.

“Many eateries may attract more guests with this service, as drinkers will prefer to go to restaurants where they know they will be protected in case of drunkenness. Their wives will also support this service,” Thanh said.

Meanwhile, a man who is a heavy drinker showed his doubt over the feasibility of the service. “Most drunkards do not admit that they are drunk,” the man said.

“Other countries have applied this service successfully thanks to the high intellectual levels of their people. But in Vietnam, this service will be hard to be implemented,” Lien said.

In order to protect people in traffic, the traffic sector should take such practical and essential measures as setting up emergency aid stations on major routes, he added.