June 10, 2013 | 09:59 (0) user say
Tweet Email Print
If the Law on Enterprises is not properly amended, it would put nearly 3,000 enterprises on the brink of filing for bankruptcy, according to an official. 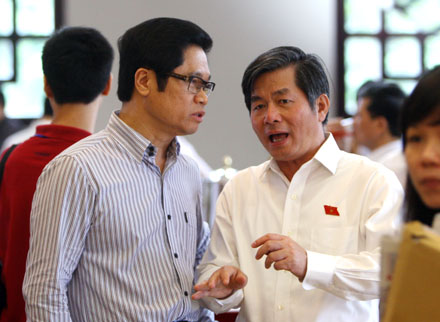 Minister of Planning and Investment Bui Quang Vinh said at a recent National Assembly’s session that Article 170 in the law desperately needs amending in order to save thousands of enterprises, ensure foreign direct investment (FDI) and employment for hundreds of thousands of workers.

This means that as of July 1, 2011, FDI firms that have yet to re-register are not allowed to supplement their business spheres nor extend their projects. They are just allowed to operate under the original fields mentioned in their business license.

The proposed amendment to the article would remove the five-year deadline for the re-registration.

The draft regulation would allow FDI enterprises to decide if they need to register but continue to operate in accordance with their business licenses.

FDI enterprises that were set up before July 1, 2006 with expired business licenses could file for bankruptcy to be allowed to re-register to continue their operations, the draft regulation said.

Bui Quang Vinh admitted the ministry’s fault in delaying the amendment of the article and promised that they would amend the regulation as soon as possible.

He added that they would issue regulations that stipulate the new deadline for such enterprises to re-register and policies for enterprises that don’t register. Any that fails to comply with the regulations would have to file for bankruptcy.

Nguyen Thi Kim Nga, NA Vice Chairwoman said many NA deputies have proposed that the government clarify the reasons why those enterprises have yet to re-register, assess the socioeconomic impact of the situation as well as investment environment for FDI firms in the country over the past time.

Meanwhile, some others proposed that relevant agencies leave expired enterprises to file for bankruptcy and then they would set up new enterprises. However, the government said such procedures would be more difficult than amending one article in the law as it would result in considerable losses, Nga noted.

“We’ll direct the Ministry of Planning and Investment and the NA’s Economics Committee to collect opinions on the issues so as to accomplish the draft amended law and submit it to the NA for approval during this term,” she added.