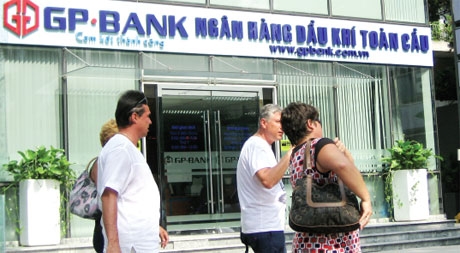 While big banks stand proud, smaller players are fighting for their lives

The trade deficit in October was estimated at $800 million, falling sharply against September’s $1.5 billion, primarily due to the limits on gold imports by the State Bank. In the first 10 months of the year the trade deficit came in at $8.07 billion, equal to 10.04 per cent of export turnover.

Registered foreign direct investment (FDI) in October rose against September, but is much lower than in October last year. It was good to see that FDI disbursement over the 10 months was estimated at $9.1 billion, equal to that in the same period of 2010 and showing that the quality of FDI is improving.

Apart from the good news, though, there are still a number of issues that need to be addressed within Vietnam’s banking system. In an effort to accumulate capital, banks are offering a lot of promotional programmes with “lucky draws” and valuable prizes.

Management of interest rates in September and October was not clear. Interest rates are lower but applicable in certain preferential packages only. Businesses that wish to borrow are required to meet a number of conditions set by banks.

Some commercial joint stock banks, however, still have high levels of 21 to 23 per cent on loans to individuals, and even 25 to 26 per cent in some cases, with rates for businesses at around 21 per cent.

Lowering lending interest rates and loosening the applicable conditions is difficult because banks are facing liquidity issues from escalating interest rates on the interbank market. There are a number of causes:

* With bad debts on the rise, banks are more cautious in offering loans. Interest rates of 17 to 19 per cent remain high and conditions are strict.

* Small banks may face some mobilisation difficulties due to the continued application of a ceiling deposit interest rate of 14 per cent. Meanwhile, the interbank market has not fully stabilised. As a result, interest rates may not be deeply lower as desired by the central bank.

* Banks need some more time to absorb capital previously mobilised at high interest rates.
In a market not fully operating, administrative policies can take effect in the short-term only with support from policies and other suitable adjustments. It is advised, however, that market tools be utilised in the long term so as to manage the market. Furthermore, administrative measures can be made valid in the short-term but not effective in the long term, and certainly not economically efficient at all times.

Banks on the move

In a direct response to the State Bank’s decision to raise prime rates, the lending rate among banks increased sharply. On October 10 most large banks pushed their rates up to 17 to 20 per cent per annum and up to 30 per cent on short-term loans. Such moves continue despite the State Bank intervention. Apart from the impacts from the policies and liquidity issues small banks must face, it seems that a new game has been set up by the larger banks.

State banks received a large amount of money from individuals in late September and early October. Conversely, small banks saw a sharp decline in deposits and so need access to capital sources in the short-term. They have little choice,  but to access capital from large banks with excess capital, but at a high cost.

Large banks are also offering loans with restricted amounts, as well as requiring collateral. This shows that the large banks are becoming more cautious in regard to liquidity. It seems that the VND28 trillion ($1.35 billion) put into circulation by the State Bank in September and  some more in October did not have the desired impact.

Small banks do not have enough valuable papers to access this source of capital, and large banks with excess capital may exercise caution in lending via the inter-bank market due to the possible risks. The pressure on interest rates remains high as a result, and the only solution may be to wait for re-financing.

Vietnam’s forex market in October was also unstable, mainly because of the gold market. In October the State Bank adjusted the exchange rate 14 times, from VND20,628 per US dollar in late September to VND20,803 on October 28, for an increase of 0.85 per cent.

The State Bank targets to contain any increases to within 1 per cent by the end of the year. After a week of declines, black market exchange rates began to increase on October 12. The difference in rates offered on the black market and at banks was significant, reflecting forex market pressure. The black market is now starting to regain some of its vigour after a subdued six months.

The State Bank target to keep exchange rate increases to within 1 per cent to the end of the year faces pressure on a number of fronts:

* Gold prices in the local market are higher than in the global market and many people collect US dollars in order to import gold, while some banks with excess dollars are making prices to earn profits by creating two levels of prices.

* Liquidity in the forex market has been reduced by increases in the purchase of US dollars by businesses. The imbalance in lending and borrowing, at up to $7 billion by August 20, will create a number of risks to the end of the year. This is mainly due to differences in the loan interest rates for loans in Vietnam dong (VND) and US dollars.

The demand for US dollars among businesses to import goods and repay loans always increases at the end of year. The fall in interest rates for loans in VND may result in black market exchange rate increases. According to a recent State Bank report, a balance of payments surplus at the end of 2011 of an estimated $4 to 5 million is expected to ensure an increase in exchange rates of less than 1 per cent.

However, differences in deposit and lending rates in the foreign currency remain high. Businesses are in need of US dollars to repay banks, which leads to an increase in demand. It appears that the State Bank may not have sufficient US dollars if any intervention becomes necessary.

* Due to unimpressive VND deposit interest rates, people began to purchase US dollars and gold instead, which results in an increase in demand for forex. Saigon Jewellery Company (SJC) and some commercial banks are allowed to sell gold and may need US dollars to fund additional imports.

* Strong net sales by foreign investors in the stock market recently have left a feeling that they are withdrawing from Vietnam. The supply of US dollars is under more pressure as a result.
The State Bank determination to manage the forex market may have a strong impact on the devaluation of the VND. If the black market continues to be managed freely, the State Bank may extend more forex reserves to stabilise the market. If the US dollar reserves are not sold, the target of limiting increases to 1 per cent by the end of the year may not be met.

In reality, the exchange rates listed at banks do not reflect the actual transaction costs. Most banks are selling US dollars higher than the listed level because they need to include their fees. This is a direct consequence of the State Bank’s failure to provide sufficient US dollar supply, as it wishes to have a stable exchange rate platform. Banks do not want to sell at low prices as they may incur losses.

Black market transactions have been under strict inspections since last March, but the complexity of the market has made it difficult for authorities to keep track. It is expected that the increases in exchange rates in October will result in a number of difficulties for import businesses in the year’s end.

In early October the State Bank decided to import more gold so as to stabilise prices. SJC and some banks are allowed to make gold transactions via accounts, but prices in the local market are higher than that in foreign markets, at around VND2 million per tael (one tael equals 37.5 grams, with one ounce being 28 grams).

On October 12, the difference in price was VND1 million, despite the State Bank efforts to sell in greater volumes to lower prices. On October 26, local market prices soared to VND45 million per tael, while the global price reached $1,700 per ounce. The narrowing of the gap has been slow. Local prices on October 31 fell by VND100,000 per tael, after increasing VND1.3 million in the previous week.

There is also a race in gold deposit rates. As soon as the State Bank decided to allow some businesses to sell gold, the race began among banks. Gold deposit rates were raised from 0.5 to 1 per cent, then to 1.5 and 2-3 per cent per annum.

All of these facts show that the gold market has not been properly controlled. The question to be asked at this juncture is whether the State Bank is actually capable of managing the market.
To resolve the issue there must be a change in the need to invest in gold, with alternatives being offered to make gold less attractive, rather than creating simply new administrative measures to suppress the investment in this metal.

* The author is an  independent economist