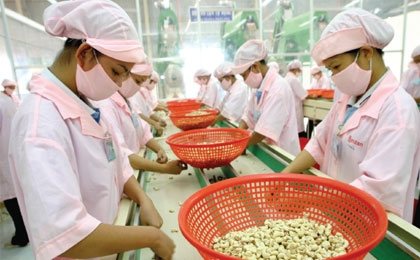 Louis Taylor, chief executive officer of Standard Chartered Vietnam, forecasted that Vietnam’s total earnings from exports to ASEAN this year would increase 15-20 per cent. Meanwhile, he said, total foreign direct investment (FDI) into the country would be $8-10 billion, much of which was to  come from Japan, South Korea and China which are ASEAN’s partners.

The Ministry of Industry and Trade reported that total import-export flows between Vietnam and ASEAN last year mounted to $38.3 billion, up 14 per cent on-year. Taylor predicted that the trend should accelerate as ties, such as free trade agreements, grow stronger.

“The jackpots will be far bigger after ASEAN establishes its economic community by 2015 when the 10-member bloc has free trade flows, free trade in the service sector as there will be a single window in the region,” the banker said.

“ASEAN economic integration will benefit Vietnam via increases in capital and investment inflows and the country’s exports.

ASEAN currently imports 15.1 per cent of Vietnam’s total exports and is the country’s third largest export market. In this year’s first two months, Vietnam fetched $2.7 billion from exporting goods to ASEAN, up 23 per cent on-year. Last year’s total  was $17.3 billion, up 27.8 per cent on-year.

Tom Aaker, CEO of Standard Chartered Bank for Indonesia, added that Vietnam might rake in export turnover of over $4 billion from Indonesia this year, up from $3.5, $2.3 and $1.4 billion in 2012, 2011 and 2010, respectively. “Indonesia will continue importing more goods from Vietnam like rice, coffee, minerals, mobile phones, computers, electronics, footwear and coal,” Aaker said.

Neeraj Swaroop, regional CEO of Standard Chartered for Southeast Asia, noted that Vietnam would significantly benefit from free trade agreements (FTA) with ASEAN’s partners. For example, the Vietnam-South Korea FTA currently under negotiation would help Vietnam annually increase gross domestic product (GDP) by 1.47-3.22 per cent, raise the country’s welfare by $600 million to $1.4 billion and expand its export turnover from South Korea by 18-20 per cent.

Swaroop said Vietnam would also benefit from the ASEAN+6 group including China, Japan, South Korea, India, Australia and New Zealand. ASEAN+6 has 3.3 billion people, occupying 48 per cent of the world’s population and GDP of $20 trillion, accounting for 29 per cent of the globe’s GDP.

Economic ministers from ASEAN+6 will this year hold first-round talks on an FTA covering wide areas of the Asia-Pacific region. The negotiations are expected to be concluded by late 2015.

“Foreign investors, when investing in Vietnam, often consider the ASEAN Economic Community (AEC) and FTAs that Vietnam has inked as big advantages for them to expand their business and products,” said Deputy Minister of Industry and Trade Nguyen Cam Tu. “The full implementation of the AEC and FTAs like the ASEAN-China FTA by 2018 will help Vietnam annually increase GDP by 4.5 per cent, and raise salary for manual workers and skilled workers by 7.6 and 9.6 per cent, respectively.”