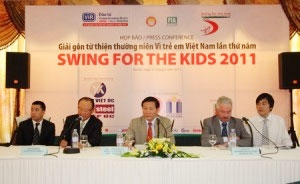 “Minh Viet has frequently had charitable activities. Because Swing for the Kids’ prime fine target is to help poor Vietnamese kids, we joined it immediately after being invited by VIR. We will continue going with this significant tournament,” said Minh Viet’s general director Edward Chi.

Minh Viet is the developer of Tricon Towers in Hanoi and the Bayview Towers in Halong Bay.

Since kicking-off in 2007, Swing for the Kids has become Vietnam’s most prestigious golf tournament, which has been joined by 565 golfers. From the tournament-based scholarship fund, more than 4,000 scholarships worth over VND3 billion ($150,000) have already been given to needy pupils and students with good study results in 38 cities and provinces nationwide.

Fueled by Minh Viet, Swing for the Kids 2011 will see about 250 golfers participate, such as diplomats, representatives from foreign organisations based in Vietnam, as well as local and foreign golfers.

Held at Phoenix Golf Course in Hoa Binh province’s Luong Son district on April 10, 2011, the fifth tournament continued to see one of its two chairmen of honour Vo Hong Phuc, Minister of Planning and Investment tee off.

What makes Swing for the Kids 2011 more interesting is that a shirt with original signatures from England’s Newcastle United Football Club, including Michael Owen’s, was auctioned to raise funds for the Vietnam Study Promotion Association.

On behalf of the organising committee and scholarship receivers, Pham Huy Hoan who is Dan Tri newspaper’s editor in chief and the association’s director, extended his sincere thanks to Swing for the Kids 2011’s sponsors. 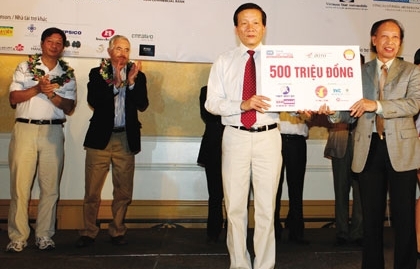 Swing for the Kids ready to tee off