September 20, 2012 | 08:36
Tweet Email Print
The Hanoi Department for Culture, Sports and Tourism carried out a field work in a preparation to build up some tourism products to craft villages, with Van Phuc silk village on the focus. 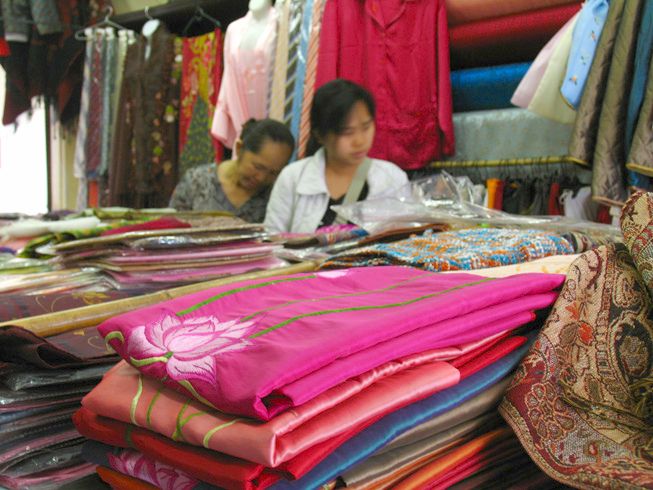 Deputy Director of the Hanoi Department of Culture, Sports and Tourism Mai TIen Dung said Van Phuc, located near the central area of Hanoi, famous with the traditional silk weaving career, always strives to develop tourism. However, Van Phuc still cannot lure a lot of tourists because of the lack of the awareness of local people about tourism development.

Meanwhile, the infrastructure system here remains too poor to attract tourists, while the services are simple and unprofessional.

Dung, in an interview given to local newspapers, admitted that though having more than 1000 traditional craft villages, Hanoi still cannot develop the “craft village tours.”

He has blamed this on the poor conditions of the roads linking to the craft villages, the unprofessional services, the lack of tour guides, and the existing problems in environment protection.

Dung has promised to support travel firms and craft villages to attract more tourists. However, Hanoi would not follow the popular way by giving money to travel firms to help them cut down expenses and design cheap tours to the villages.

He has affirmed that the local authorities would not prop up money to the travel firms that bring travelers to craft villages.

“I believe that travel firms would automatically bring tourists to craft villages once the villages can show their attractiveness and the professional services,” he added.

A model that associates the production and tourism would be built up at the craft villages. Travelers would be able not only to visit the villages which make wonderful handicrafts, but also to learn about the production, buy ready made products or place orders.

Van Phuc silk village, for example, is planning to attract tourists with its fame as a traditional silk weaving village, where high quality silk products are sold and skillful craftsmen live.

Van Phuc has been praised as the ideal place for those, who are fond of silk products and souvenirs, to go to.

Van Phuc has been called the “silk shop town,” where almost all houses along the paths have been turned into shops selling silk products. The village is now the home to more than 1000 households, 90 percent of whom are involved in silk production and business. The village makes several million meters of silk every year.

Van Phuc has organized a lot of events to popularize the image of Ha Dong brand silk. In the immediate time, it would join the yearly craft village festival to be organized by the Hanoi Department of Culture, Sports and Tourism. This would be a golden opportunity for Van Phuc to introduce the beauty of Ha Dong silk to travelers.

Not only Hanoi, but other localities also plan to attract more tourists with the tours to craft villages. The Thua Thien-Hue provincial people’s committee has announced it would organize the handicraft career festival in 2013, an effort to strengthen the role of craft villages in tourism development.