August 26, 2019 | 09:43
Tweet Email Print
Numerous international investors, including Chinese groups, plan to relocate their facilities to ASEAN countries to avoid the impact of the US-China trade dispute. Phan Huu Thang, former head of the Foreign Investment Agency under the Ministry of Planning and Investment,  writes about multinationals’ concerns, particularly about human resources, and the exact potential of the market in Vietnam.

Vietnam has been considered an attractive investment destination for numerous multinational groups, including big names listed on the Fortune 500 such as General Electric, Coca-Cola, Samsung, Sumitomo, and Honda.

This is because of the socio-economic stability, fast economic growth, and a large population of nearly 100 million people, as well as Vietnam’s efforts to integrate with the global economy. These investments do not start from the impact of any trade war or other objective reasons.

Besides, it is not the first time that we have seen a wave of facilities relocating from China to Vietnam. In the late 1990s, for example, massive numbers of groups decided to move to Vietnam. In addition, at times when China has had a volatile economy, domestic companies decide to relocate their facilities to places like Vietnam in droves.

KNOT TO BE REMOVED

In the case of the US-China trade war, recently Apple has asked its major suppliers to assess the cost implications of moving 15-30 per cent of the group’s production capacity from China to Southeast Asia as it prepares for a restructuring of its supply chain.

Businesses that have been asked to evaluate options outside of China include iPhone assemblers like Foxconn and Pegatron, MacBook maker Quanta Computer, iPad producer Compal Electronics, and AirPod makers like Inventec and Goertek. The countries being considered include Mexico, India, Vietnam, Indonesia, and Malaysia.

Vietnam is, however, missing out on some attractive opportunities. Notably, Pegatron chose Indonesia instead of Vietnam for its first diversification of manufacturing away from China as Indonesia has a larger base of human resources. Pegatron’s case is understandable because the corporation’s project will be of a large scale, thus it needs a huge amount of skilled labour.

Thus, these new players are inevitably concerned about competition to attract employees with existing multinationals in Vietnam – namely Samsung, LG, Coca-Cola, and Hyundai, among others.

In the meantime, Vietnam is faced with a shortage of high-end personnel, thus the movement trend of investors in China will set challenges for those to run businesses in Vietnam. The challenges will be bigger with electronic manufacturers, especially large-scale ones, which require big numbers of skilled workers.

Additionally, a number of corporations are not willing to disclose with local media their plans for relocation outside of China. Foxconn is one ­example, having previously ­invested in a huge plant in Shenzhen city of Guangdong province.

Luring billion-dollar ­projects in Vietnam will bring ­massive benefits, including contributing to the restructuring of the economy, promoting socio-economic development and ­import-export turnover, and generating jobs, among other things.

However, these benefits only become reality when foreign investors comply with regulations, and their projects are in alignment with the foreign investment policy of the local government.

Besides that, local authorities must carefully monitor the construction and operation process of licensed projects, as well as tax obligations.

On the other hand, foreign investors failing to implement their billion-dollar commitments will draw heavy ­consequences, including taking up valuable land resources that could house alternative projects, and ­losing tax for the state and local budgets.

The task for Vietnam is to enhance its offerings to foreign investors to take a larger slice of the pie of multinationals ­diversifying production away from China.

First, it is necessary for Vietnam to proactively choose to attract foreign-invested ­projects with high technology content, ensuring the principle of generating high-added value for the economy in accordance with Vietnam’s foreign direct investment (FDI) attraction policy in the new era.

Second, the country needs to be more careful in accepting projects offered by foreign ­investors. In general, Vietnam may want to restrict permits for projects from some of these international investors, and to protect itself from further ­unnecessary pollution on a large scale.

Last but not least, Vietnam will have to continue to ­improve the investment ­environment, increase monitoring activities at projects, and increase the training of skilled human resources.

Furthermore, it is important to complete the regulatory ­framework for the country’s new-generation FDI attraction strategy in the time ahead. 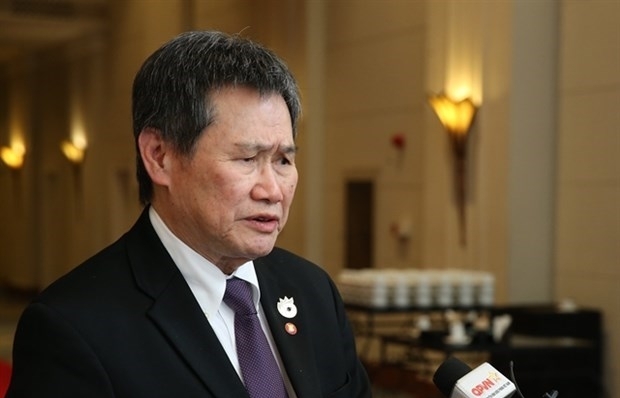