October 15, 2012 | 14:08
Tweet Email Print
Binh Duong New City project, which is expected to be Ho Chi Minh City’s satellite city, is considered as one of the most important projects by the Vietnam government. 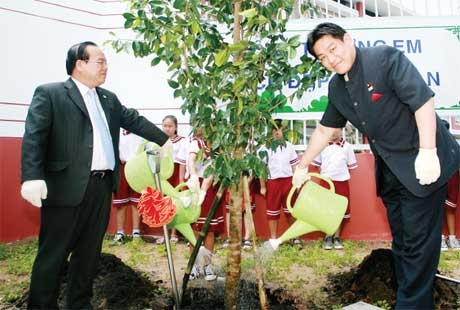 A tree was watered at the Ngo Thoi Nhiem school by Le Thanh Cung, chairman of Binh Duong’s People Committee (left)  and  Yuichiro Hata, Japan’s Minister of Land, Infrastructure, Transport and Tourism (right) last week as a symbol of increased cooperation and growth between the two parties

The important visit was conducted with the goal of enhancing the recent investment wave from Japan into Binh Duong in particular and Vietnam in general. The visit also aimed to speed up the construction process of the $1.2 billion Tokyu Binh Duong Garden City, a large-scale ecological urban community, that is being developed by Vietnam-backed Becamex Group and Japanese firm Tokyu Corporation.

The Japanese-style project is part of the massive Binh Duong New City, a master-planned new urban area. The project also reflects the government’s commitment to the continuing development of Binh Duong province as an important complement to the economic hub of Ho Chi Minh City, Dong Nai province and Ba Ria-Vung Tau province.

“Binh Duong New City project, which is expected to be Ho Chi Minh City’s satellite city, is considered as one of the most important projects by the government,” said Le Thanh Cung, chairman of Binh Duong People’s Committee. “The prime minister pays much attention and is willing to support and create good conditions for developers to successfully complete the project.”

“We confirm our determination to soon put the Tokyu Binh Duong Garden City project into operation in the future with the main aim to effectively contribute to the general development of the area and the nation,” added Cung.

In addition to expressing confidence in the project’s future, Hata said he is hopeful that the Japanese government will soon issue policies to strongly support Japanese investors who want to invest in Binh Duong.

“The visit to the schools Ngo Thoi Nhiem and East International University helped us to realize how much Binh Duong province focuses on education and talented people,” he said. “ That is the important thing to develop the nation. Japanese investors should take  notice of the issue and I will report my government to issue policies relevant to technology transfer and skillful labour development for Binh Duong province in particular and Vietnam in general.”

Hata also emphasized that Japan has experiences in master-planned urban development and it has been reconstructing after the recent disasters and natural calamities. The lessons, he said, can be applied to Vietnamese urban development.

With designs and consultations from Singapore’s leading firms, Becamex IDC’s 1,000-hectare Binh Duong New City project plays an important role in the comprehensive development of the province’s urban system, contributing to upgrading Binh Duong into a central government-managed city by 2020.

The city’s infrastructure will be completed and connected to other areas of the province and the southern key economic region. Technical infrastructure facilities, including power and water supplies and optical fibre telecommunications systems, have been built. Meanwhile, parks, sport areas and education facilities have been developed and put into operation.

The Binh Duong political and administrative centre, a symbol of the province’s development in the new era, will be located in Binh Duong New City. A high-tech approach is expected to enable the public to easily access effective and friendly administrative reform.

The city’s masterplan also entails large-scale industrial parks, cultural and exhibition facilities, shopping and financial centres, hotels and restaurants. Housing plans include nearly 65,000 apartments for low-income earners with the aim of creating a good living and working environment for more than 160,000 people.

Upon its completion, the project will feature apartments, an entertainment park, office buildings and shopping centres. The project’s objection is to attract more investors to the province while also enhancing the lifestyle and working environment for local residents.

Tokyu Corporation is one of Japan’s leading urban development groups. Over its 90-year history, besides developing urban and trading property, Tokyu also has worked on such projects as bus and railway systems used by more  than 2.9 million people daily; developing and managing entertainment parks and hotels; and creating retail, IT and security systems. It has also been involved in educational and cultural activities such universities and museums.

Takahashi Toshiyuki, CEO of Tokyu, said that Tokyu has learned to combine its skills to create the highest-standard urban areas that place a premium on convenience.

Toshiyuki emphasized the success of its Tokyu Tama Denen project in Japan,  and said Tokyu hopes to continue to work with Becamex IDC on other high-quality projects for Vietnam in the coming years.

Sustainably developing the provincial economy and society is Binh Duong province’s priority target. A special focus has been placed on developing a talented, skillful workforce.

To meed the demand, Becamex developed East International University and cooperated with Ngo Thoi Nhiem School in Ho Chi Minh City which has established a strong reputation over 15 years, to develop a Ngo Thoi Nhiem school system in Binh Duong.

Binh Duong province’s gross domestic product in the first nine months of 2012 reached 11.2 per cent - double than the growth rate of the country and 1.5 times higher than the growth rates of key economic areas. FDI enterprises’ total product value increased 13 per cent, with exports rising  18 per cent.

The province also attracted $2.4 billion in FDI capital, triple year on year. So far, Binh Duong attracted has 176 Japanese projects valued at $3.1 billion, or about one-sixth of total FDI capital flows into the province.

At the latest meeting between leaders of Binh Duong province and Japanese enterprises, Ho Chi Minh City-based Japanese consulate general Harumitsu Hida said: “Despite the impacts of global economic downturn, Japanese investors have been investing into Binh Duong province in different fields. We recognised positive comments about investment environment in the province.

Reasonable policies help the enterprises work effectively, including improved administrative procedures such licensing investment certificate and approvals. “We hope that in the near future, not only Japanese investors but also other investors from other countries will flock to Binh Duong province to invest,” added Hida.

Hung also emphasized that work must continue for the city to develop more services in commerce, finance and banking, as well as a talented, skilled workforce.