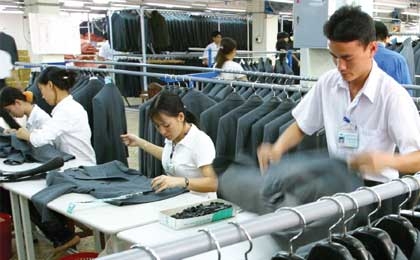 Vietnam’s expanding trade in the first nine months of 2012 is a bright spot amid the economic gloom, registering a trade surplus of $34 million. That figure, while a small fraction of overall trade, represents a dramatic change after two decades of trade deficits, which has reached multi-billion-dollar levels in recent years. Vietnam’s annual trade deficits from 2007 through 2010  exceeded $10 billion, with a peak of $18 billion in 2008. In 2011, the deficit was $9.8 billion.

Over the first nine months of 2012, Vietnam’s export values hit $83.8 billion, an 18.9 per cent increase over the same period of 2011, and the strongest growth among various economic metrics. The total also exceeded the entire 2010 export value $72.1 billion, as well as the $57.1 billion and $62.7 billion marks, respectively for 2009 and 2008. The total export value for 2012 is projected to reach $112 billion, which is higher than the state target and would eclipse the previous record of $96.9 billion.

Among the products leading the export growth in the last nine months are phone handsets of all types and components, computers, electronic products and components, electric and cable wires, fertilisers, and vehicles and auto parts. Twenty groups of products recorded an export value of at least $1 billion, led by garments and textiles at $11.25 billion. Phone handsets and components ranked second at $8.55 billion, while the figure for crude oil was $6.34 billion and for computers, electronics and parts was $5.36 billion.

These articles’ export values accounted for nearly 25 per cent of the total export value with the values of five products hitting at least $1 billion, led by rice. Data shows that rice exports reached 5.9 million tonnes in the year to September 15, as China became Vietnam’s largest rice customer with 1.57 million tonnes.

The trade surplus helped increase foreign exchange reserves, improve the balance of payment and stabilise the VND/USD exchange rate.  In the first nine months, the value of the US dollar decreased 0.94 per cent against the dong.

Vietnam still has insufficient supporting industries and mostly exports raw materials or low value-added goods. Such raw materials as crude oil, coal, minerals and ores  accounted for nearly 10 per cent of the total export value, while unprocessed or semi-processed agro materials accounted for 20 per cent.   Vietnam’s imports of machines, equipment and parts was $10.78 billion, with China account for nearly one-third of the goods. Meanwhile, abusing temporary imports for re-exporting remains rampant.

The low import growth during January-September was partly due to shrinking import demand for production and consumption.