Shares bounce back after the biggest single-day loss

Selling pressure and new community infections of COVID-19 that were reported in Hai Duong and Quang Ninh provinces led to the steepest fall on Thursday, marking a fourth straight session loss. However, the sell-off ended on Friday as investors flocked back to the market for bottom purchases.

Overall the market breadth was positive with 375 stocks climbing, of which 29 hit the daily limit gain of 7 per cent, while 90 stocks declined. And 35 stocks ended flat.

During the session, nearly 797.4 million shares were traded with a trading value worth VND17.83 trillion.

Three out of five stocks in the 30 large-cap basket lost around 7 per cent, the maximum intra-day loss. These stocks were EXIMBANK (EIB) down 6.91 per cent, FLC Faros Construction JSC (ROS) down 6.86 per cent and Saigon Beer - Alcohol - Beverage Corporation (SAB) down 6.96 per cent. EXIMBANK was the only stock in the top 30 posting a gain on Thursday.

Top five stocks positively influencing the market were Vingroup JSC (VIC) up 6.88 per cent, Vinhomes JSC (VHM) up 6.98 per cent, Viet Nam Dairy Products JSC (VNM) up 6.97 per cent, Vietcombank (VCB) up 2.65 per cent and JSC Bank for Investment and Development of Viet Nam (BID) up 3.77 per cent.

On the Ha Noi Stock Exchange, the northern benchmark HNX-Index also bounced back on Friday. The index increased by 5.5 per cent to 214.21 points. The HNX30-Index climbed 4.2 per cent to 316.35 points.

In the trading session, domestic investors poured nearly VND2.7 trillion into the northern bourse, with a trading volume of over 203.4 million shares.

Cash inflows from foreign investors also found their way to Viet Nam's market with over VND1.1 trillion pouring into the southern market and VND6.62 billion on the northern bourse. 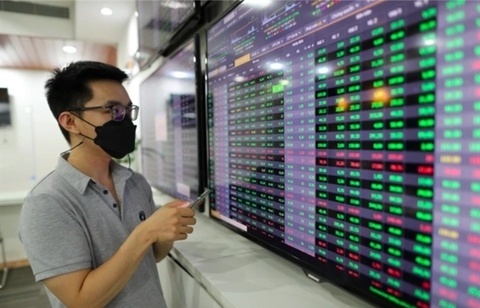