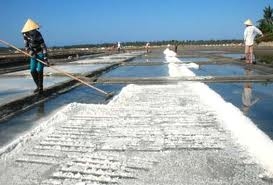 The MoIT is considering granting quotas for first-round industrial salt imports of 53,000 tonnes.

A MoIT representative said the intended quota-based import volume was minuscule against the forecasted demand of 280,000 tonnes needed in 2012.

Besides, under World Trade Organization commitments, Vietnam’s quota-based salt import would be around 192,000 tonnes in 2012. The MoIT and the Ministry of Agriculture and Rural Development (MARD) came to a decision to issue quota for import of 102,000 tonnes of salt only in 2012.

Viet Tri Chemical Company director Dao Quang Tuyen said: “Last year through media agencies we invited local salt producers to take part in bids on industrial salt supply, but got no feedback.”
Tuyen said locally-made industrial salt was not on a par with chemical production demands and poor quality salt could drive up the cost of treating substandard products.
Some chemical firms had to import industrial salt outside the quota scheme with high import duty of 60 per cent.  Besides, the MoIT argued that local salt manufacturers were invited to join MoIT and MARD meetings discussing salt import quotas.

Representative of several salt firms said they did not take part in these meetings because they were discontented with the way the MoIT and MARD handled salt imports.

“The government has aired a number of policies to support the salt industry, but the MoIT and MARD did not effectively handle supportive policies,” said Southern Salt Group general director Tran Quang Phung.

Vinafood’s Branch for Salt Experiment and Technology Transfer director Bui Son Long assumed firms wanted to import salt because importing quota-based salt would be cheaper than buying it in the domestic market.

Industry experts assumed the contradiction between firms producing and using salt could not be tackled if quota-based import management mechanism continued. Phung suggested salt imports be controlled by tax instead of quota regime to increase transparency in salt import management.