June 23, 2022 | 14:42 (0) user say
Tweet Email Print
Offering a less attractive salary and welfare package is one of the reasons why many foreign-invested enterprises in industrial zones cannot retain local workers, some of who are going to desperate lengths to get by financially.

Inadequacies in salary are causing a shift of workers among foreign-invested enterprises. Taiwanese-backed Foxconn, the world’s largest iPhone contract manufacturer, is complaining about a battle to attract more affordable labour with its Chinese rivals in Vietnam.

Young Liu, CEO and chairman of Foxconn, this month accused the company’s Chinese competitors of setting up campuses near its base in Vietnam to get closer to its workers.

Foxconn’s campus, located in the northern province of Bac Ninh, currently employs around 60,000 workers, and the company has plans to increase that number over the next two years. Once the battle for workers becomes more serious, the company may face the risk of employee shortages.

While the Foxconn CEO would not disclose the names of the competitors involved, the current crop of 31 companies – employing around 160,000 workers – that produce Apple products in Vietnam include major names such as Luxshare ICT, Pegatron Vietnam, and BYD Electronics Vietnam.

Some workers have noted that Luxshare ICT wages are slightly better than what they were on previously, hence the shift occuring between companies in more recent times. Do Van Binh, a local of the northern province of Bac Giang, this year decided to leave Foxconn to work for Luxshare with the expectation of getting a higher salary.

Binh said that the basic salary offered by Luxshare ICT is around $215 per month. Workers are also provided additional assistance each month that includes $20 for housing, $13 for fuel, $9 to support workers working in a toxic environment, and more.

“Meanwhile, at Foxconn the basic salary is about $20 less per month, with the other assistance a few dollars lower too,” Binh said.

Many other Vietnamese workers are living in narrow circumstances due to low incomes, an issue that was addressed last week by Vietnam’s top leaders.

In last week’s livestream between Prime Minister Pham Minh Chinh and around 4,500 workers based up and down the country, around 10,000 questions were submitted as well as proposals focusing on 10 groups of general problems.

Notably, workers are hopeful regarding the minimum wage increase from July 1, while many also gave comments about adjustment to social housing and social insurance policies, improving professional qualifications and skills, and solving problems related to implementing preferential policies for workers that have suffered from COVID-19.

Measures to ensure jobs, income, and loan support for workers were also discussed, and so were inspections of employers that violated labour regulations by not signing contracts with workers, not paying salary or social insurance, and not ensuring safety and hygiene.

Ensuring a stable living standard for workers is the government’s leading concern. On June 12, the government promulgated Decree No.38/2022/ND-CP on prescribing statutory minimum wages paid to employees working under employment contracts. The regional-based minimum wage will officially increase by 6 per cent from July 1.

Some companies have pointed out, however, that wage increases will increase costs and disrupt business plans for the year. Representatives of the Vietnam Chamber of Commerce and Industry stated that they had expected increases from January 2023 rather than earlier, while smaller enterprises have complained that the wage hike will increase human resources costs and become an extra burden due to reduced revenues already being suffered.

Increased external risks thanks to lockdowns in China and the Ukraine conflict have also resulted in skyrocketing prices of raw materials and commodities, in turn damaging business budgets. Some employers have stated that their labour costs would increase at a minimum of 10 per cent

Truong Tien Dung, vice chairman of the Ho Chi Minh City Food and Foodstuff Association, believes that the rise in wage bills would be passed on to product prices, fuelling inflation.

“Businesses have been put into a difficult position because it was not compulsory to raise wages for those workers who had been paid above the minimum level. However, if employers do not pay more during a wage rise, they may face dismay from the workers, resulting in dissatisfaction,” Dung said.

Another risk for workers is potentially becoming embroiled in black-market loans.

Tran Thi Toan, trade union staff at Taiwan-headquartered New Apparel Far Eastern Vietnam Co., Ltd., noted that this is a common issue in many areas. “Many workers have been mired in financial difficulties but have been unable to get loans from banks, forcing them to get black-market lending.”

Loan sharks usually entice workers to borrow money directly or through applications or social networks with unusually high lending rates, which is an average of 90-100 per cent per month and even up to 700-1,000 per cent per month. “When workers fail to pay on the due date, they are threatened,” she said. 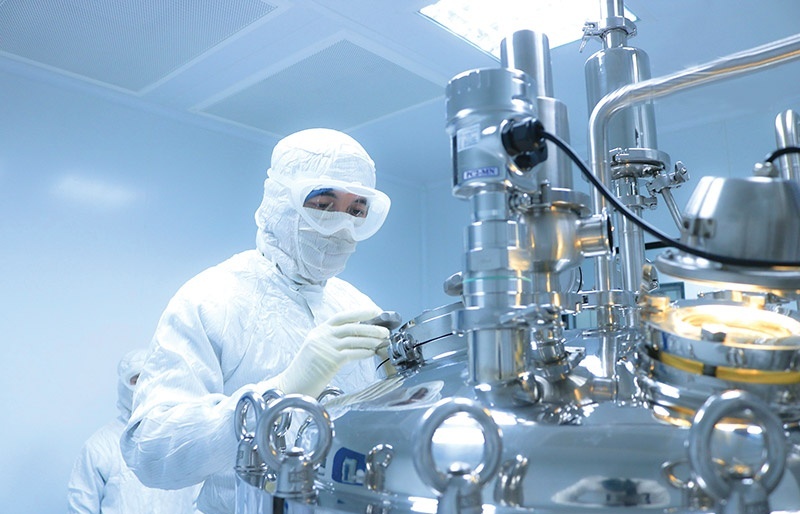