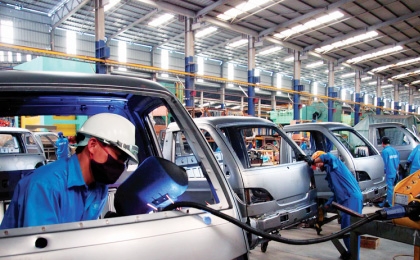 The message was highlighted in the Ministry of Planning and Investment’s report released last week to update its economic performance after five years of World Trade Organization (WTO) membership.

Raymond Mallon, an Australian senior economist supporting the CIEM in producing this report, said Vietnam’s declining economic quality was also due to the country’s low labour productivity, which was $5,900 last year, equal to 13.2 per cent of Japan, 23.3 per cent of Malaysia, 12 per cent of Singapore, 13.3 per cent of South Korea, 46.5 per cent of China, 37 per cent of Thailand and 69.9 per cent of the Philippines.

The World Bank and the Government Inspectorate in 2012 conducted a survey over 2,600 citizens, asking them to identify three most serious issues for Vietnam at present. Some 44 per cent of total responses selected cost of living while 21 per cent chose income and 15 per cent chose jobs.

"There are good reasons to believe that Vietnamese citizens are increasingly worried about the quality of growth and not just its quantity," said Mishra, the lead economist from the World Bank.

The General Statistics Office said Vietnam's macro-achievements, featured by inflation and growth indexes, had worsened in the 2007-2012 period as compared to the 2001-2006 period.

The United Nations Development Programme in Vietnam calculated that only 15.2 per cent of Vietnam's total public investment was currently spent on social services and 7.7 per cent on governance, compared to 77.1 per cent for economic growth-related purposes.