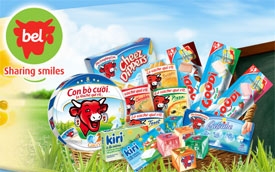 Spanning over 5,000 square metres in Binh Duong province’s My Phuoc 3 Industrial Zone, the $6.6 million facility is also the first factory of Bel Group in Asia region.

According to Antoine Fievet, Bel Group’s CEO, the facility was designed with most modern European technology to produce cheese products and Goodi launched in the Vietnam market at the same time. “This event marks a milestone of Bel Vietnam in investment and product development strategy in Vietnam market,” said Fievet.

In addition to that, a new business model of Bel Vietnam “door to door” selling channel was kick started in Vietnam market for Goodi.

Employing more than 100 staff in its office in Ho Chi Minh City and its factory in Binh Duong, Bel Vietnam committed to work closely with distributors and retailers to bring the high quality cheeses to consumers all around the country.