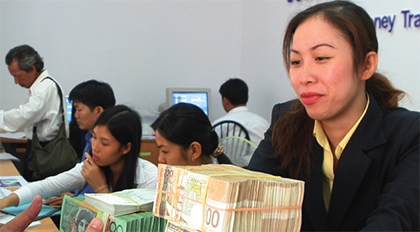 But, the State Bank has sought to allay fears, characterising part of the problem to an unfounded rumour.

“The State Bank will maintain a stable exchange rate and was  ready to intervene to stabilise the foreign exchange market,” the State Bank announced.

Last week, the selling price of a US dollar listed at Vietcombank, a strong commercial bank in forex activities, increased from VND20,880 last Monday, February 18 to VND21,000 last Thursday, February 21, 2013. The exchange rate listed at other commercial banks also increased, the highest level observed at BIDV is VND21,036 per dollar

Moreover, people withdrew their deposits to spend, creating a surplus of VND in the market after Tet.

However, the State Bank  on February 21 said there was a market rumour causing confusion. The State Bank is working with the Ministry of Public Security to clarify the source of the rumour.
After the announcement, at the end of last week, the exchange rate showed some minor declines in price.

According to Nguyen Thi Hong, head of the central bank’s Monetary Policy Department, the State Bank did not consider adjusting the exchange rate as it would create inflation pressures.

Meanwhile, other experts are calling for an exchange rate adjustment to support exports.

According to Le Xuan Nghia, member of the National Advisory Council for Monetary Policies, the VND was being over-valued by more than 20 per cent.

“Thus, the government should actively adjust the exchange rate within 4 percent this year to support exports,” said Nghia

Banking expert Nguyen Tri Hieu said that the State Bank should allow the exchange rate to adjust within 3 per cent, and the adjustment must be made as soon as possible or in the first quarter this year.

However, in 2012 the State Bank was successful in keeping the exchange rate stable, which suited with the macroeconomic stability target. This target is still the government’s top priority in 2013, so the State Bank would be cautious in controlling the forex market.

The adjustment could stimulate exports. However, given Vietnam’s current situation, there were many factors to consider whether a exchange rate adjustment can affect exports, according to Hong.

Those factors including the current low demand from foreign countries, the fact that Vietnam exports mostly semi-processed products, and the competitiveness based on quality and type of products, not only price.

Le Quang Trung, acting general director of Vietnam International Bank (VIB) said it must be calculated whether a 3-4 per cent depreciation in VND could bring a correlative effect on export value. “As local production still depends mainly on imported materials, the VND depreciation could make the production cost of local producers increase,” said Trung.