March 06, 2013 | 11:34 (0) user say
Tweet Email Print
The lack of high-quality hospitals, increasing income levels and the rising age of the general population in Vietnam is making healthcare a profitable sector for private investors. 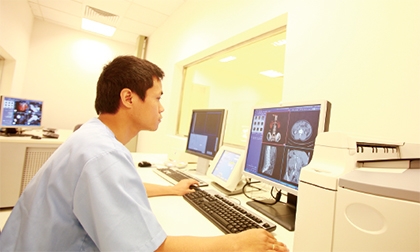 Statistics from the Ministry of Planning and Investment’s Foreign Investment Agency show that there were 78 foreign-invested projects in Vietnam’s medical industry, including pharmaceutical production, as of February 20, 2013. According to the Ministry of Health (MoH), only six hospitals and 14,354 clinics in the country are under the management of foreign investors at this time, and 130 other hospitals are under management of domestic private firms.

Serving a population of 88 million, the healthcare system in Vietnam, both public and private hospitals, are lagging behind the growing demand for care. At some public hospitals, five or six patients even have to share a bed because of the overloading. Many wealthier Vietnamese are willing to pay more for better patient cares. Many Vietnamese people travel to the US, Singapore, Thailand, South Korea and China for medical care.

The MoF estimated each year Vietnamese spent about $2 billion on healthcare services abroad, due to the lack of high-quality hospitals in the country. This translates into opportunities for private investors, especially foreign ones, to expand business in Vietnam’s healthcare sector.

Marc Kealey, general director of Triple Eye Infrastructure Corporation, which is planning to build a 200-bed hospital in northern Hai Duong province, suggested that the official estimates were low—and that Vietnamese spent as much as $5 billion on healthcare abroad each year.

“We look at in this context that we could repay money back to the hospital, we could design and build hospitals and do all procurements. We could see even effect of 1 per cent of that $5 billion or 2 per cent is pretty good sake,” he said.

Columbia Asia in April 2013 opened its new hospital in Vietnam, the latest addition to the group’s hospitals in the region. The Columbia Hospital-Binh Duong is the group’s 22nd healthcare facility in the region and the third Columbia facility in Vietnam after the one in Gia Dinh in Ho Chi Minh City. The group also has an international clinic in the city’s District 1.

When Columbia Asia first opened in Vietnam in 1998, a large portion of its patients was expatriates and tourists.  Over the last 12 years, as the living standards have increased, Vietnamese citizens became a greater percentage of the firm’s patients. In 2001, only 20 per cent of patients at Columbia Asia Gia Dinh International Hospital were local Vietnamese. But in 2012, 80-85 per cent of its patients were local Vietnamese, said Evans.

Some other domestic private investors also invested in healthcare sector to tap on this huge potential. Vingroup, a domestic property developer, one year ago inaugurated international-standard Vinmec hospital in Hanoi. This is the largest private hospital in Vietnam at this time with 600 beds, six times larger than the operating French Hospital of Hanoi.

And Hoa Lam-Shangri-La Healthcare Limited Liability Company, a Singapore - Vietnam joint venture, is building a $400 million International Hi-Tech Healthcare Park in Ho Chi Minh City, which is expected to be operational this year.

City International Hospital is the first hospital in this ‘Medical City’ that will be managed by a Singapore-based leading private healthcare group in Asia, ParkwayHealth. Under Parkway’s management, the hospital is expected to emerge as the premier healthcare provider addressing the current shortage of world-class, value-based integrated private healthcare services and facilities in Ho Chi Minh City.