April 23, 2021 | 08:00
Tweet Email Print
Solving women’s economic empowerment is not only about increasing their incomes, but also about helping them improve their decision-making power in the family, community, and society. Phil Harman, the leader of the GREAT programme on empowering women through economic and tourism development, discusses the issue with VIR’s Thai An.

After more than four years of implementing projects to support ethnic minority women in the mountainous provinces of Lao Cai and Son La, what do you see as the biggest barrier in reaching and empowering them?

Half of the ethnic minority people, especially the H’mong people participating in the project, cannot speak Vietnamese, which makes it difficult for us to implement the project, especially in approaching and working with them.

In addition, we sometimes have to deal with issues related to social norms holding back the development of women in the community such as the fact that many ethnic minority families do not want their children to participate in the tourism industry because of the negative perceptions associated with it.

How have these challenges been addressed?

We have implemented three steps: approach, benefit, and empowerment. Approaching them is probably the easiest step because we only need to involve women in project activities.

The second step is to create benefits, how to help women access resources to participate in production, increase their income, and create jobs for them.

The empowerment step is the most difficult because we have to address issues such as how to increase women’s participation in decision-making or balance workloads between wife and husband in the family, proceeding to improve women’s leadership in activities.

Through the current projects, how do you evaluate the confident and active behaviors of ethnic women?

Ethnic minority women are poor not because they are from ethnic minorities but because they have not had the opportunity to access knowledge to improve their income, develop production and do not have access to input resources such as raw materials and techniques.

We are developing a market map to engage women in the value chain in the production process, focusing on changing existing services for women such as increasing training activities to improve their skills, and at the same time providing support to help them access credit in a better way.

In addition, we work with private firms to address the underlying causes of poverty rather than just the superficial symptoms.

In addition to the tourism sector, project activities also focus on agricultural occupations, including traditional industries that attract more women to participate such as tea cultivation, rice and medicinal plant cultivation, and bamboo shoots. There are also new industries where women have a large participation, such as the planting of ramie.

We are already seeing the sector starting to grow but to take it to the next level, we need increased investment in the sector, mainly to improve processes to grow ramie seedlings but also other support including logistics and training services.

At the same time, we also focus on solving issues such as policies, increasing access to finance, applying digital technology in the ethnic minority community, and improving the startup mindset.

The programme isn’t only designed to enhance people’s capacity, it also trains and integrates gender topics into activities. The gender topics in the project have an impact on changing people’s mindsets in their daily life. For example, people, especially women, were very shy in the meetings or when they contributed ideas about their household’s economic development.

Now, they have become more confident and are more willing to share their ideas or suggestions at the meetings. 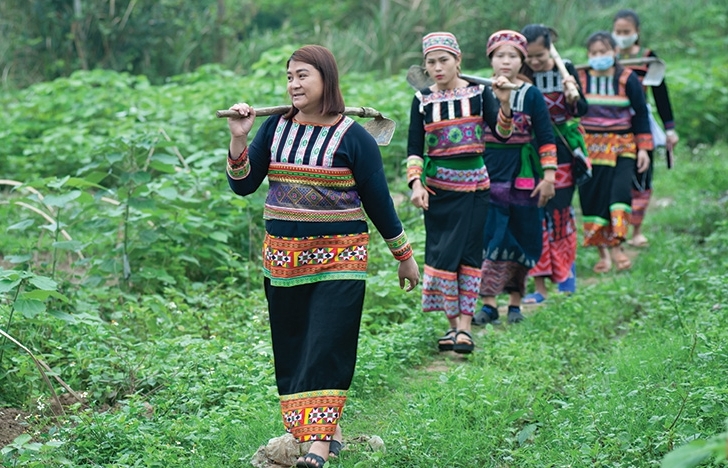