July 17, 2021 | 09:00
Tweet Email Print
Vietnam has come a long way in gender equality, with changes in the legal framework now protecting women better than ever before. However, much works need to be done before total equality can be achieved.

Writing to VIR, Atty-Roos Ijsendijk and Elaine Chew, vice chairs of recently-launched Women in Business Sector Committee (WIB), shared that many managers are still biased against women. For instance, it is not unusual for potential employers to ask about a woman’s personal life in job interviews, out of concern that household responsibilities would make her less available to perform her duties at the workplace. Some even ask women not to get pregnant for a certain amount of time as they do not want to find a replacement while they are on maternity leave.

“That this is why new protected grounds of discrimination were added to the new Labour Code including family responsibilities and pregnancy. One way this could be addressed would be to increase paternity leave. In many countries, the mother and father can share the maternity leave period. So, during recruitment, employers understand that either parent could have a prolonged absence from the workplace,” the vice chairs said.

While women’s participation in the workforce in Vietnam is very high, few occupy upper management roles. Talent is lost, especially when female employees are not considered, at each stage of the career journey. It is not a glass ceiling women face, but a leaky pipeline.

Indeed, Vietnam experiences the greatest loss of talent at the middle management level because of the lack of family-friendly policies. There still appears to be a stigma regarding certain fields of work and senior management positions, so women are turned away. However, with greater awareness of tapping into 50 per cent of the workforce, employers can create a productive and inclusive workplace.

“Nonetheless, perceptions on the value of girls and their abilities does seem to be changing,” Ijsendijk and Chew stated. “Vietnam is increasingly seeing more girls in science, technology, engineering, and mathematics who finish secondary and tertiary education. The new Labour Code has also made many positive changes to help women advance in the workplace. These include setting out detailed regulations on the prevention of sexual harassment and eliminating the list of ‘prohibited occupations’ for women.”

Slowly but surely Vietnam is moving away from an attitude of protectionism, and towards one of women’s empowerment where women are free to make their own decisions regarding their careers and families.

To facilitate the goal, the European Chamber of Commerce launched the WIB sector committe in April, composed of organisations and individuals committed to advancing gender equality in the workplace and in business organisations.

The committee aims to work with stakeholders such as individuals, business organisations, private enterprises, and the public sector to fulfil its mission. It also aims to implement Chapter 13 of the EU-Vietnam Free Trade Agreement by facilitating the improvement of an inclusive and diverse business environment in Vietnam with equity between genders.

The committee will also provide an influential platform for women in business to advocate gender equality in Vietnam, which will increase the profitability of EU-invested companies.

AVPN, a pan-Asian network for social investors, also recognises the gender gap. In recent months, AVPN and regional partner Investing in Women have partnered with both the Australian and American chambers of commerce to hold a series of events to raise the concept of investing with impact in companies with women in focus.

Christina Ameln, Vietnam advisor of AVPN, said that the country is often top of the list with its high number of women represented in the workforce. However, according to a report called Gender-Lens Investing: A Snapshot of Progress in Indonesia, Philippines and Vietnam, this data can be misleading.

Women are still most impacted by underemployment, unemployment, and unstable working conditions. This ambiguous data also increases the perception that there is limited gender inequality in Vietnam which can be a barrier for improving conditions for women.

“Women still face multiple challenges – and in the context of female entrepreneurs, the challenges are access to capital and access to networks,” Ameln said.

“Gender-lens investing is still new here but it has shown to have many benefits for environmental, social, and governance investors and the recipient company that emphasises diversity. These include increased financial returns, diversity in skills, and opportunities and innovations not looked at in traditional models. There is an immense opportunity to enable the potential of women as consumers, entrepreneurs, and employees given the large concentration of women in the region.”

AVPN works with its social investors to improve outcomes for women and girls across Asia through different approaches: For example, its Asia Gender Network, a high-net-worth community, aims to mobilise more capital towards critical gender-related causes including modern slavery and sexual violence. AVPN also equips investors to develop smarter portfolios with a gender-lens. Its new Gender Lens Investing Fellowship launched in 2021 and provides a structured platform for investors to learn and adopt new skills.

Ameln noted, “Empowering women and girls to become agents of economic development is the smart thing to do especially as we focus on COVID-19 recovery. It is all hands on deck.”

Indeed, gender equality at work is directly linked to a country’s overall economic performance, according to Chew and Ijsendijk of WIB. Higher rates of gender equality lead to improved organisational performance, better recruitment and retention of employees, higher productivity and economic growth, and a more positive corporate reputation.

According to the WIB representatives, Vietnam recognises this and the new Labour Code states that employers must provide equal pay to men and women as well as equal working conditions. However, further legislative changes should be made to implement these provisions, they say. In particular, Vietnam should set out specific and objective factors to be assessed in determining whether the treatment of male and female workers is equal.

These could include the tasks involved in the work; the required experience, ability, and education; the degree of mental and physical exertion; the level of accountability and responsibility; and the working conditions.

Ideally, WIB says, a commission could be set up within each Department of Labour, Invalids and Social Affairs to handle complaints related to equal employment rights. This way, the individuals dealing with these issues would be well-informed of the objective criteria to be considered in evaluating complaints and develop expertise in handling these matters.

The committee urges the government to make a CIT cut available to all industries, and to change the CIT cut from simply making some expenses deductible to a flat reduction of CIT based on the percentage of upper-management positions held by women. For example, if companies with over 50 per cent of their upper-management were entitled to a CIT reduction of 5 per cent, this would motivate real change. 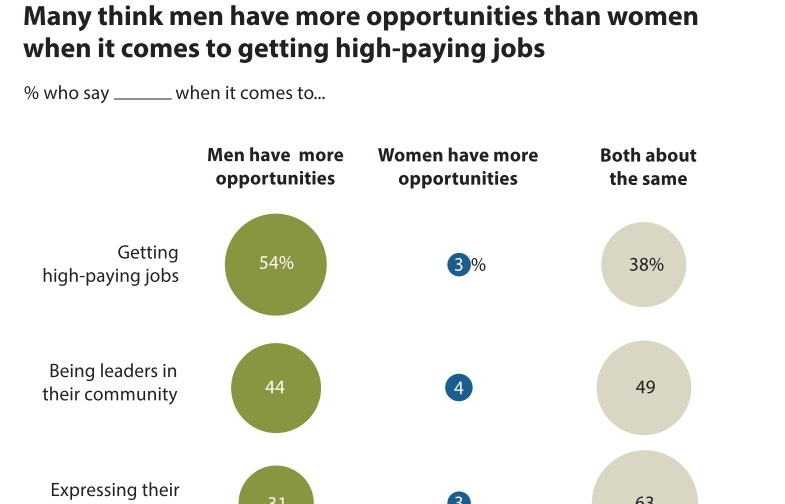