February 13, 2019 | 08:48 (0) user say
Tweet Email Print
With an aim to industrialise and modernise the economy by 2020, Vietnam is actively pursuing science and technology innovation as well as the attraction of foreign investment into relevant industries, especially robotics. Phuong Thu reports.

Returning to Vietnam for the occasion of opening Vietnam’s first Robotics Technical and Service Centre, Arno Strotgen, vice president of ABB’s Customer Service, Business Unit Robotics, shared his conviction that the country will become an important regional and maybe even global manufacturing hub.

A smart factory in the 4.0 era embodies a range of manufacturing technologies that fuse the physical and digital worlds, with breakthroughs in Artificial Intelligence (AI), robotics, the Internet of Things (IoT), metrology, and 3D printing seen as the main drivers. Smart factories represent a tremendous evolution from a traditional automated production system into a system which can continuously connect and process data. Analysts predicted that smart factories would make up 5 per cent of total global output by 2025 and bring a profit of $70 billion.

ABB’s robots are used in industries in Vietnam, such as automotive, electronics, animal feed, food and beverage, chemicals, as well as metal and brick fabrication. The company recently supplied thousands of robots to an electronics manufacturer and to VinFast – the first Vietnamese electric automobile maker.

In June 2017, Samsung SDS concluded a strategic agreement with CMC, the second-largest ICT service company in Vietnam, to promote the smart factory business in Vietnam. At Samsung’s factory in the northern province of Bac Ninh, 6,000 robots are working on the assembly lines.

Vinamilk, the nation’s leading dairy producer, has spent VND2.4 trillion ($104.3 million) setting up an automatic production line. At its factories, the transportation and sorting of goods are done by robots.

The Vietnamese economy is known as one of the fastest growing in the world. Vietnam’s GDP grew by 7.08 per cent in 2018, the highest in the past 11 years, the General Statistics Office (GSO) announced, buoyed by a humming manufacturing sector. The government’s efforts include the 2011-2020 Strategy for Science and Technology Development to enhance economic competitiveness and speed up industrialisation, prioritising the importance of industrial robots and hi-tech automation.

Shermine Gotfredsen, general manager, Southeast Asia and Oceania at Universal Robots (UR), said: “Cobot [a robot designed to collaborate with human workers] demand is rising in Vietnam as businesses are recognising the importance of employing advanced technology and robotics to maintain a competitive advantage. Furthermore, the government has made Industry 4.0 a top priority, developing action plans to accelerate the adoption of new automated technology and attract more foreign investors.”

Talking about cobots in the 4.0 era, Gotfredsen shared: “Beyond their innate Industry 4.0 compatibility, cobots have played a major role in enabling companies that might not have been able to afford industrial robots to start automating their processes. As they are versatile, easy to programme, small, lightweight, and affordable, cobots are being deployed at small- and medium- sized enterprises (SMEs) to retrofit older factories belonging to companies that might not be in a position to build a turnkey Industry 4.0 facility, and at companies of all sizes in developing countries.”

By “democratising” robotic automation this way, cobots help companies across the globe join the latest wave of automation, even if they are not ready to go all the way to Industry 4.0, according to Universal Robots.

Giving a general view, Strotgen from ABB said the global robotics industry has grown fast over the last five years. Sales doubled and growth rose by double digits every year. In 2017, a record year, the World Robotics Report showed that a new record of 381,000 units were shipped globally, an increase of 30 per cent compared to the previous year. This means that the annual sales volume of industrial robots increased by 114 per cent in the five years up to 2017. Sales value increased by 21 per cent compared to 2016 to a new peak of $16.2 billion.

The main driver of this growth was Asia. The continent is the world’s fastest-growing market for robotics solutions – and for good reason: as the region’s quickly-growing countries industrialise and begin making more goods than ever, robots help them do so at a comparatively lower cost than with human capital.

The automotive industry remains the largest adopter globally. The manufacturing of passenger cars has become increasingly complex over the past 10 years. A substantial proportion of the production processes nowadays require automation solutions using robots. Manufacturers of hybrid and electric cars are experiencing stronger demand for a wider variety of car models, just like traditional car manufacturers. Furthermore, the challenge of meeting 2030 climate targets will require a larger proportion of new cars to be low- and zero-emissions vehicles.

Besides, the automotive industry and electronics sector, newer fields such as logistics will have more robots coming. The big trend is in collaborative robotics, and ABB has presented YuMi that can work beside humans. For example, a single-arm YuMi robot, developed by ABB, can be used to feed parts to a dual-arm YuMi to speed up cycle time or can be added as an extra arm to integrate a testing and inspection station into an electronics assembly application. The single-arm type also features the same intuitive, easy-to-use lead through programming as the dual-arm, meaning even workers without specialised training can set up and operate the robot. Combining this simplicity with the robot’s deployment flexibility can help manufacturers in many industries offset shortages of skilled workers. Thus collaborative robotics is a promising area for the future.

“We have opened Vietnam’s first robotics technical and service centre in the north to support businesses to deploy advanced manufacturing technologies. Vietnam is at an exciting phase of its development. We have seen large local companies such as VinFast using the latest technologies in their manufacturing base, or state corporations such as Electricity of Vietnam (EVN) starting to look for digital management solutions. Whether it is about delivering smart cities, smart factories, smart grids or renewable energy or electric vehicles, we look forward to continuing to bring ABB’s innovative technologies to the country,” said Brian Hull, ABB’s country managing director in Vietnam.

He added: “With ABB Ability™, we look forward to delivering digital and connected solutions that enable our customers to improve quality, flexibility, productivity, and reduce production costs. This means increases in profitability and margins for the customers. In addition, flexible and agile operations are becoming more and more beneficial to businesses.” ABB breaks ground on its advanced robotics factory in Shanghai 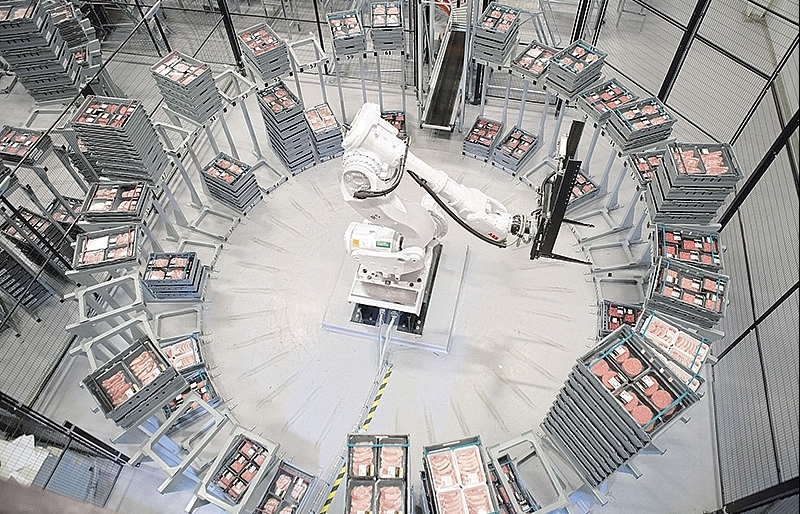