August 11, 2014 | 15:32
Tweet Email Print
The Ministry of Finance has decided not to include carbonated soft drinks in its list of items subject to special consumption tax – a radical shift from the policymaker’s previous view. 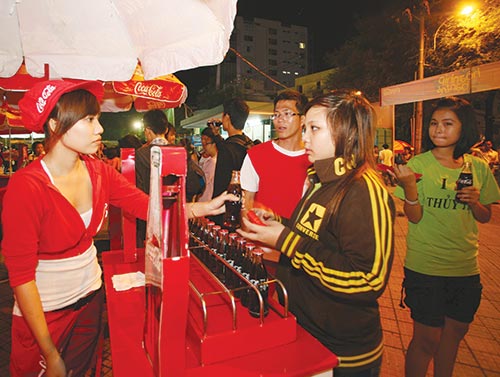 After ardently supporting the addition of carbonated drinks to the list of SCT goods, the MoF has relented,
Photo: Le Toan

Huynh Vuong Nam, a senior official of the General Department of Tax Policy under the Ministry of Finance (MoF), confirmed with VIR at July’s regular government meeting that the MoF had submitted the final amended draft of the Law on Special Consumption Tax (SCT), in which it asked the government not to apply the 10 per cent SCT on carbonated beverages.

Nam said the Vietnamese government agreed with the MoF’s final decision and would submit the revised draft law to National Assembly deputies for discussion this October. If passed, it will take effect in July next year. Accordingly, carbonated beverages such as Coca Cola, Pepsi and others would not be taxed. However, Nam refused to comment as to why the MoF made this turnabout.

The ministry previously stated that carbonated soft drinks should be on the list, and cited their harmful effects, including diabetes and obesity, as the main cause behind the move. The ministry proposed an SCT rate of 10 per cent and projected that the volume of these drinks sold in Vietnam would reduce by more than 6.8 per cent due to a likely price hike.

In previous comments to VIR, Ngo Huu Loi, head of the MoF’s Tax Policy Department, said the proposal to enact a 10 per cent SCT on carbonated drinks was called for, and claimed that research conducted by health organisations showed that carbonated drinks, if consumed in large quantities, could cause obesity, diabetes and gout. He added that more than 50 countries, mostly in Europe, applied an SCT to carbonated drinks. Some neighbouring countries such as Cambodia and Thailand have also put an SCT rate on carbonated drinks.

The proposal received pronounced opposition from both government bodies and beverage companies, and most notably, foreign beverage producers in Vietnam from the minute it made the headlines.

The Ministry of Industry and Trade expressed concerns that the tax would adversely impact both foreign and domestic carbonated drink producers.

Vietnam’s beverage market has for a long time been a key market for foreign firms. According to figures from the MoF, last year Vietnam consumed 925 million litres of carbonated soft drinks, of which foreign firms such as Coca Cola and PepsiCo made up the largest market share with 88 per cent.

Since it is near to impossible to compete with foreign beverage giants, domestic companies have focused on non-carbonated alternatives.

The MoF’s decision to not include carbonated drinks in the law takes the pressure off of concerned beverage companies throughout the country, particularly foreign firms, which would have been hardest hit.

Adam Sitkoff, executive director of Amcham Hanoi said, “We are pleased that the Vietnamese government has decided not to move forward with this harmful tax and the results of the government’s consultations with the business community sent a positive signal to international investors about the country’s commitment to creating a more open and competitive business environment.”