April 24, 2014 | 16:45
Tweet Email Print
At the ongoing appeal trial in Hanoi for a corruption case at Vinalines, the prosecutor’s office asked the court to uphold the capital sentence for Duong Chi Dung, ex-chairman of the state-owned corporation while lawyers requested that the court cancel the first instance hearing’s results for a re-investigation. 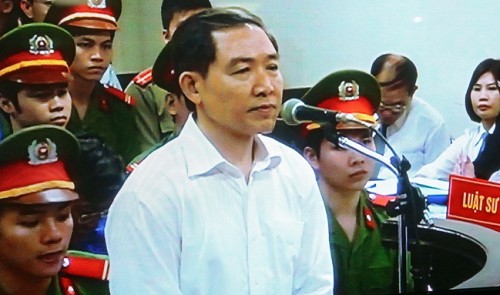 The re-probe demand followed the emergence of an affidavit by the managing director of the Singaporean brokerage accused of paying over $1.6 million in kickbacks to Dung and his accomplices in return for Vinalines’ purchase of a $9 million old floating dock from a Russian company six years ago.

The appeal hearing for Dung, 57, former chairman of the Vietnam National Shipping Lines (Vinalines), and eight other defendants who appealed their sentences given by the Hanoi People’s Court in December 16, 2013, entered its second day on Wednesday, when many lawyers demanded the court annul all the first instance verdicts.

At last December’s trial, Dung was given the death penalty on charges of embezzlement and an 18-year imprisonment sentence for intentionally violating state regulations on economic management, causing serious consequences.

Meanwhile, the other eight defendants received sentences from four to 22 years in jail.

Of the accused, nine including Dung and Phuc appealed their verdicts after the first instance court.

On Tuesday, the first day of the appeal court, Dung denied the embezzlement charge, saying he did not receive VND10 billion (US$470,000), part of the $1.666 million kickback paid by a Singaporean broker, AP Company, to Vinalines officials after the state firm bought an old floating dock at $9 million from a Russian company in 2008, as stated in the indictment.

According to the jury, a loss of over VND366 billion ($17.4 million), including repair fees, storage expenses, transportation and other expenditures, was caused to the state budget as of May 2012 following the purchase of the old dock.

Upon receiving the bank transfer, Son gave Dung and Phuc VND10 billion each.

On Wednesday, the prosecutor at court proposed that the jury uphold the death sentences for both Dung and Phuc as their offenses were very serious.

Affidavit from leader of Singaporean firm

Speaking before the court yesterday, lawyer Tran Dinh Trien, who defends Duong Chi Dung in the appeal trial, said he had gone to Singapore to collect evidence to appeal against the embezzlement charge.

Trien said that he had obtained an affidavit dated April 16, 2014 by Goh Hoon Seow, managing director of AP, who represented the firm in selling the old dock to Vinalines.

In the affidavit, Goh said he had never contacted Dung and Phuc or discussed, whether directly or indirectly, with them the sale of the dock.

Goh confirmed that during the process in which he negotiated with Tran Hai Son and others who represented Vinalines in the deal, the Singaporean man did not say anything about giving a kickback to the Vinalines side.

The managing director also said that he and Son talked through an interpreter as the latter could not speak English.

The Singaporean businessman said Vinalines paid $9 million for the old dock through an L/C, and $1.666 million was a part of the amount and expected to settle expenses related to exporting the old dock from Russia to Vietnam.

Goh added that he had not talked with Dung or Phuc about the $1.666 million sum.

AP did not know about Phu Ha Co Ltd until Global Success, a brokerage firm representing Russian company Nakhodka that sold the old dock to Vinalines, told Goh that Phu Ha would receive $1.666 million, according to the affidavit.

Meanwhile, according to the indictment, Dung and Goh Hoon Seow had had a close relationship since 2000.

Before the contract was signed, the Singaporean businessman had arrived in Vietnam to meet Dung and Phuc, suggesting that the ex-chairman buy the dock through AP, the indictment said, adding that Dung agreed to the suggestion.

As there are contradictions between Goh’s affidavit and Vietnam’s indictment, lawyer Trien asked the jury void the results of the first instance trial and return the case file to the investigation agency for a re-investigation.

Meanwhile, lawyer Ngo Ngoc Thuy, who also defends Dung, said that there is no ground based on which Dung can be charged with embezzlement, as many details related to the $1.666 million sum have yet to be clarified.

Thiep complained the prosecutor’s office has failed to consider new evidence and testimonies that have surfaced at this appeal court.

Therefore, the lawyer said, a re-investigation is necessary in order to look further into all details in connection with the alleged $1.666 million bribe from AP to the Vinalines officials.