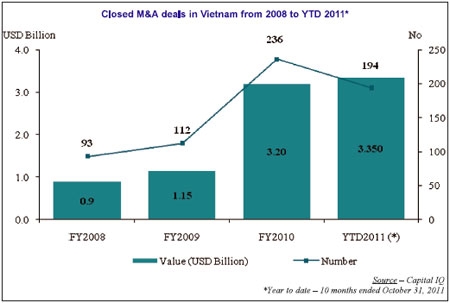 As global and local economic uncertainty decreased, 2010 saw strong M&A growth over 2009 with deal volumes more than doubling and deal values near tripling to $3.2 billion.  With global economic uncertainty coming to the fore again, 2011 is not seeing the rates of M&A growth experienced in 2010.  However, deal values in 2011 have already exceeded 2010 levels, and we can expect deal volumes to match those of the prior year by the end of the current year based on current figures.

So in which industry sectors are the deals occurring?

The clear M&A sector leader is financial services, both in volume and value. This is hardly surprising as financial services, and in particular the banking sector, is generally the first in any economy to experience significant M&A activity. Given the nature and scale of businesses in this sector, deal values also tend to be relatively high compared to the economy as a whole.
The consumer markets sector is also seeing significant M&A activity.  Deal flows in this sector reflect the current and expected strong consumer spending growth in Vietnam, and resultant favourable prospects for many companies operating in this sector.

So where are the buyers’ countries of origin?

Japan leads the M&A country of origin table due primarily to the recent Vietcombank and Mizuho Bank deal of $546 million. Japan, with 14 deals to date in 2011, also represents a key source of foreign M&A investment into Vietnam. The key buyers originating from the US were both private equity firms, such as KKR into Masan ($159 million) and Mount Kellett Capital into Masan Resources ($94 million). Singapore, with 16 deals to date in 2011, also figures strongly in terms of deal volumes, the acquirers being largely Singapore-based private equity firms.

As would be expected, Vietnamese companies are by far the leading buyers of Vietnamese businesses in terms of deal volumes. This  has been driven by Vietnam corporates, with M&A buy-side activity from Vietnam focused private equity firms being relatively low in 2011, reflective of the challenges they have faced raising new funds during the past couple of years.

Notably, 2011 has seen no outbound M&A deals, i.e. Vietnam companies acquiring stakes in foreign companies, with Vietnamese owned companies’ M&A buy-side activity being focused on the rapidly growing domestic economy. The recently concluded Vietcombank and Mizuho Bank deal leads the way. This deal was for a 15 per cent stake in Vietcombank at a trailing P/E multiple of 18x and P/B multiple of 3.6x. Second on the list is the Netherlands’ Vimpel’s acquisition of a 9 per cent stake in one of Vietnam’s leading telecommunications companies, GTEL Mobile.
Also of note is KKR’s acquisition of a 10 per cent stake in Masan Group.  This is a landmark deal, being one of the largest investments by a leading global private equity firm into a leading Vietnamese business. 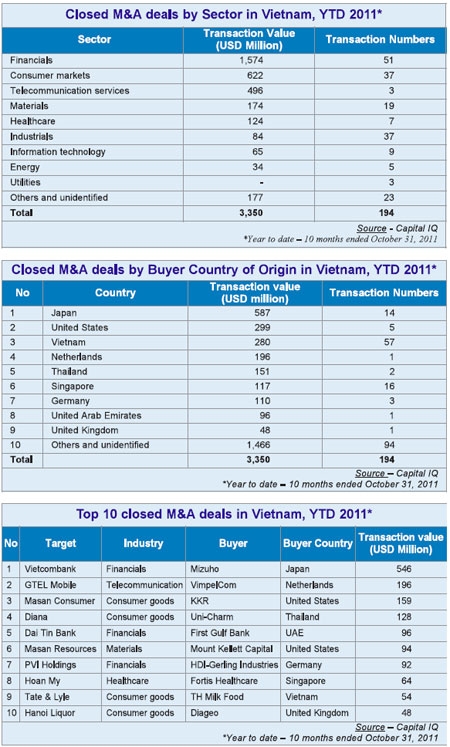 So what trends do we expect to see in Vietnam’s M&A market in the coming year? Overall we expect to see continued growth in M&A deal volumes and values in 2012 over 2011 despite expected continued economic uncertainty; growth being driven by:

* The challenges experienced by many corporations in obtaining sufficient debt coupled with the relatively high cost of debt.
* Vietnamese companies continuing to seek strategic partners to assist with the development and growth of their businesses.
* Most importantly, the continued medium and long-term strong growth prospects for the Vietnamese economy as a whole.

* Continued high levels of activity in the financial services and consumer goods sectors, the former being driven in part by recent government announcements regarding consolidation in the banking sector.
* Continued strong deal flows from Japanese and Singapore buyers. The Japan deal flow into Vietnam, and South East Asia as a whole, is being driven by the strong Yen, mature and limited growth prospects in the domestic market and aided by a large number of Japanese corporations being cash rich.
* Local private equity firms play a continued relatively minor role as acquirers.