The project seeks to desalinate seawater using windmill technology, therefore resolving the long-standing saltwater intrusion into rivers and groundwater in several provinces throughout the south-central and Mekong Delta regions.

It is funded by the Belgian government through its Finexpo’s SME instrument, the Belgian company Smart Universal Logistics (SUL) and the Ministry of Agriculture and Rural Development (MARD), with the total investment reaching $12 million.

This is Vietnam's first pilot model of water pumps powered by windmills. It has a daily capacity of 20 square metres, supplying clean water directly to ten impoverished houses in An Hai commune, Ninh Phuoc district, and a 1000-sq.m test irrigation area.

Le Quoc Doanh, Deputy Minister of the MARD said, “The technology is unique and innovative due to the automated transition from the grid to the windmills and then backwards. It is comparable to solar panels installed on roofs of private residences to provide a stable power supply.”

He emphasised the necessity of developing a sustainable solution for clean water in the Mekong Delta region.

“This pilot project is critical in light of the severe climate change implications that Belgium and Vietnam have already been suffering. The salinisation of the Mekong Delta is one of the most severe concerns induced by climate change, owing to its catastrophic impact on agriculture and the lives of local farmer communities,” Doanh said.

According to the Vietnam Disaster Management Authority, the Mekong Delta has been experiencing unusual weather that might stem from climate change.

In the joint report by the United Nations and two other international organisations on Vietnam's drought and saltwater intrusion in the Mekong Delta, salinisation is expected to penetrate up to 110km inland in the next few years. In many locations, the level exceeds the highest figures reported in 2015-2016 at the same time of the year.

Salinisation and drought exacerbate a variety of socioeconomic issues in the Mekong Delta, including sanitation, food security, education, and health and nutrition, also wreaking havoc on the quality of life and the sustainable development of the region.

In addition, saltwater intrusion causes a shift in occupational structures. According to the General Statistics Office, there was a reversal of the trend of families engaged in fisheries and rice cultivation between 2001 and 2021.

Within a decade, one in every five homes converted to a fisheries farm, resulting in a decrease by 15 per cent in the number of households depending on other agriculture. By utilising alternate wind turbine technologies, the region's core problem of clean water would be addressed.

"The water-to-wind model is the most cost-effective solution of producing freshwater from saltwater. Currently, you do not see the windmill at the riverbank because we start the first phrase. After the first phase of operation with Electricity of Vietnam for six months, we will use the windmill to generate power to run the pump system autonomously in the second phase," said Marc Stordiau, CEO of SUL. "The system's lifespan may be extended to 5-20 years if routine maintenance is ensured."

Le Huyen, Deputy Chairman of Ninh Thuan People’s Committee shared, “The project marks an important milestone of the Vietnam-Belgium collaboration and the strategic partnership in the agricultural sector, notably in deploying renewable energy sources efficiently to tackle problems in production and the livelihood of the locals. I expect that the windmill technology may allow people in Ninh Phuoc district to get clean water for everyday usage, therefore easing their troubles in the dry season.”

Nguyen Hai Minh, who belongs to one of 10 households who benefited from this pilot project said, “At present, the capacity of the pilot model can meet the water demand of 10 households and some coconut and grape fields. Hopefully, in the near future, the project will be enlarged so that many more households can benefit from it.”

The MARD and SUL are striving to increase the machines' capacity to at least 800cu.m. per day and extend the application of the complete water-by-wind model to other provinces in the region.

The complete system deploys wind turbine poles with a minimum capacity of 2MW to generate energy for the desalination system and feed nearby communities. 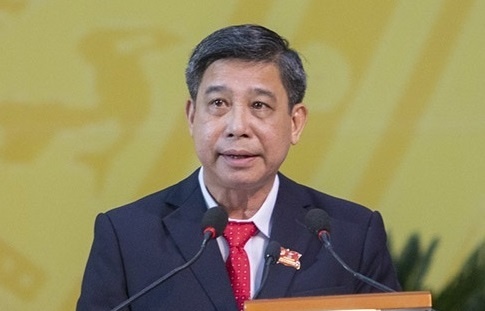