A brighter forecast for the new year

January 02, 2013 | 10:44
Tweet Email Print
On the eve of the new year, Deputy Minister of Planning and Investment Cao Viet Sinh told VIR’s Tung Ha that the economy in 2013 will see positive changes with important results thanks to the government’s specific measures. 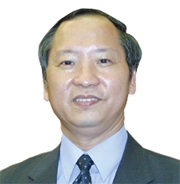 Vietnam’s economy has undergone a challenging 2012, but there are encouraging signs as well. What is your assessment?

Vietnam’s economy grew 5.03 per cent in 2012. Though this rate was lower than the initial target and in previous years, it is a reasonable rate amid the economic difficulties domestically and globally, and when the government has to lay stress on curbing inflation and stabilise the macro-economy. With the government’s big efforts, the inflation rate has in 2012 been tamed at 6.81 per cent with the local market remaining relatively stable.

This is an encouraging result, especially when it is far lower than the inflation rate of 18.58 per cent in 2011.

In 2011, when the consumer price index was complicated, it was widely forecast that the inflation for 2012 would stay at a high level. However, the government, right from December 2011, took positive actions and asked ministries, sectors and localities to make greatest efforts to use a series of solutions for 2012’s first months. Such actions included the harmonious combination of the flexible and tight monetary policy with the flexible fiscal policy, and reductions of public investment, in order to successfully implement the 2012 Socio-economic Development Plan.

Of course, the inflation of 6.81 per cent also results from low demand for consumption. However, it is noted that the government’s Decree 01/NQ-CP and Decree 13/NQ-CP are the very important foundations for the economy reaped important fruits in 2012.

Could you elaborate more on these benefits?

The most important thing we have got in 2012 is that the macro-economy has been stabilised. In terms of concrete figures, the export growth rate is 18.3 per cent with $114.6 billion, and the overall balance of payment sees a surplus of $8 billion, marking a significant improvement from a deficit of $3.1 billion in 2010 and from a surplus of 2.65 billion in 2011.

The foreign currency reserves have also quickly augmented, from $10 billion to $23-24 billion. Local industrial and agricultural production have gradually recovered and better grown, despite difficulties.

Besides, economic restructuring and growth model renewal, one of the economy’s important targets, have also begun to be boosted. This has been reflected by the merger and acquisition of a series of banks. Some state-run business groups and corporations have also withdrawn capital from non-core business sectors.

Especially, public investment restructuring – the field the government assigned to the Ministry of Planning and Investment for implementation - has reaped very positive results which are highly valued. We have in 2012 actively carried out the prime minister’s Instruction 1972/CT-TTg dated October 15, 2011 on strengthening the management of state budget and government bonds-funded investment. We have closely controlled the usage of capital sourced from the state coffers and government bond issuances. We have boosted the reductions of public investment and removed barriers to better the efficiency of investment. This has helped tame inflation and stabilise the macro-economy. Instruction 1792 has been a good weapon for us to effectively manage public investment.

Additionally, we have also shifted the allocation of the state’s capital from a yearly basis to a three or five year basis. This will help localities take the initiative in selecting substantial projects based on the total sum of allocated investment capital. Though localities invent projects, these projects must be closely appraised by the government before capital can be given to them.

Actually, Instruction 1792 has greatly ameliorated Vietnam’s public investment effectiveness. In 2013, clearer results will be seen. In 2012, results from our examination of public investment activities at ministries, sectors and localities show that 96.5 per cent of capital that the government allocated to ministries, sectors and localities has been closely supervised and used for right purposes in the spirit of Instruction 1792. The state’s capital has been used exclusively for key projects completed in 2012 and 2013 and for counterpart funding for projects backed by official development assistance (ODA). Thus it is expected that Vietnam’s public investment picture will see substantial improvements by 2015.

Nevertheless, it is still said that Vietnam’s economic restructuring remains at a snail’s pace, isn’t it?

Yes, the government also recognises this. Thus, one of its pivotal tasks for 2013 will be to accelerate the economic restructuring, with three kernels including public investment, banking-financial and state-owned enterprises restructuring.

Besides, despite some important results in 2012, some important goals set in the 2012 Socio-economic Development Plan have failed to be reached. Specifically, the macro-economy remains not so stable and firm, while the industrial production, particularly processing and manufacturing industry, has slowly recovered, in step with a high level of inventory. Local enterprises’ business and production activities remain difficult. The number of enterprises with bankruptcy or ceased operations is high, affecting labourers’ employment and livelihood. Meanwhile, banks’ bad debts have been slow to be solved and the property market remains in a standstill. These issues need to be bulldozed in 2013.

So the economy is still beset by difficulties. What do you think about the possibility of  fulfilling the 2013 Socio-economic Development Plan?

At the close of 2012, the government had an online meeting with localities nationwide discussing solutions to implement the 2013 Socio-economic Development Plan. There will be two resolutions enacted, with the first one about socio-economic development for 2003 and the second one about removing difficulties for enterprises and the property market. Issues regarding solving bad debts and coaxing foreign direct investment were also discussed. Many specific solutions will be issued soon.

The prime minister has also once again affirmed that during 2013, the government would continue laying big stress on curbing inflation and stabilising the macro-economy, striving to reach an economic growth rate higher than in 2012 and an inflation rate lower than in 2012.
The prime minister has also required ministries, sectors and localities to take strong actions right from 2013’s beginning months, so that the 2013 Socio-economic Development Plan can be successfully realised.

I do believe that with so many concrete solutions and the government’s vehement instructions, and the high determination from the central to grassroots levels, the Vietnamese economy in 2013 will see many positive changes and continue reaping important achievements.