VietShip 2012 to be held in Hanoi late February

February 16, 2012 | 19:46
Tweet Email Print
Nearly 200 domestic and foreign shipbuilders and maritime groups will take part in an international exhibition in Hanoi from February 28 to March 1. 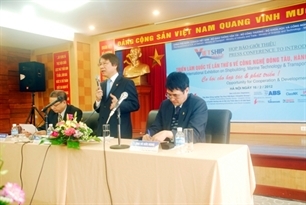 Two thirds of the participants come from Japan, the Republic of Korea, China, Holland, Poland, the Netherlands, Switzerland, Norway, Singapore, Russia and Spain.

The information was revealed by Nguyen Quoc Anh, deputy director of the Vietnam Shipbuilding Industry Group (Vinashin) at a press conference in Hanoi on February 16, announcing the sixth international exhibition on shipbuilding, marine technology, and transportation (VietShip 2012).

Anh said the exhibition takes place at a time when the global financial slowdown has seriously affected economies, as well as the shipbuilding and maritime transport industries.

He added that several contracts worth a total of around $100 million will be signed during the event.