September 16, 2020 | 10:00
Tweet Email Print
The Ministry of Industry and Trade’s Circular No.18/2020/TT-BCT on project development and the standard form of power purchase agreements is a positive move that brings about new prospects for rooftop solar projects. Vaibhav Saxena and Tu Hue Anh from Vietnam International Law Firm write about how the new regulations increase the competition of the power market in Vietnam.

The Ministry of Industry and Trade’s (MoIT) Circular 18, which moved into effect on August 31, will replace Circular No.16/2017/TT-BCT from 2017 and provides detailed guidance for the implementation of Decision No.13/2020/QD-TTg dated April 6 on incentives for the development of solar energy in Vietnam.

There are several key points to highlight. Grid-connected ground-based and floating solar power projects that obtained in-principle approval before November 23, 2019 and commercial operation date of all or part of the project between July 1, 2019 and December 31, 2020, shall be eligible for the feed-in tariff rates under Decision 13.

There is removal of the regulation on provincial solar power development planning, which aims to enhance centralised master planning for the power sector. It blends with the vision of the Vietnamese government to maintain centralised master planning in the power sector and have better synchronisation from a planning perspective to support the precise implementation of the upcoming Power Development Plan VIII, which is expected to shape-up as a policy by the first quarter of 2021.

Circular 18 had removed the minimum requirement for the equity capital under the past regulation (Circular 16). However, this removal shall not make any remarkable change since the domestic land laws still require that an investment project must have equity capital of at least 15 per cent or 20 per cent of total investment capital, depending on the project land area.

Circular 18 also provides requirements on the contents of the basic design document of a solar power project, while land and water surface areas under time-bound use of the project must not exceed 1.2 hectares or one megawatt peak.

In terms of an electricity permit, rooftop solar power systems with a capacity of up to 1MW are exempt from obtaining such an electricity operation license.

Circular 18 permits the power seller to adopt the new power purchase agreements (model PPA). Specifically, in case of grid-connected solar power projects (including a part or the whole project) and rooftop solar power systems that have their PPAs signed and were put into commercial operation between June 30, 2019 and August 31, 2020, the power purchaser and the power seller are permitted to re-sign or amend and supplement the existing PPA in accordance with the model PPA.

The model PPA provides a new term for confirmation of change in the commercial operation date (COD), which is from one month to three months before the expected COD prescribed under Appendix B on specifications of the power plant as attached to the model PPA.

Under the model PPA, the purchaser is entitled to stop purchasing power in certain cases. However, the model PPA has not detailed much on the scenarios where those incidents are caused due to a breach by the purchaser or a force majeure event affecting or attributable to the purchaser.

Circular 18 has detailed the payment timeline for the parties to follow compared to Circular 16 (for example the power purchaser shall make payment to the power seller within 25 working days from the date of receiving the valid and correct invoice issued by the power seller).

The indemnity holder shall demonstrate its loss and degree of loss caused by the breaches and the direct benefits which the indemnity holder should have received if there were no breach of the PPA terms. However, it is noted that the model PPA fails to specifically recognise the lender’s step-in rights which has been a prolonged bankability issue since the inception of solar policies in Vietnam.

The model PPA in Circular 16 provides that, taking the required measures following the occurrence of a force majeure event shall exempt the defaulting party from liability relating to failure to discharge its obligations under the PPA. This regulation may create the risk of the power purchaser making a force majeure claim to delay energy payments.

Thus, the model PPA under Circular 18 has clarified that such exemption from liability will not include “liability in relation to payment of amounts due under the PPA before the point of time when such event of force majeure occurs.”

If a dispute arises between parties, the model PPA under Circular 18 provides that parties shall settle it through negotiation first before using any other means of dispute resolution, following the timeline specified under the model PPA (that is, Article 8.1).

Where the dispute cannot be settled through negotiation or one of the parties fails to comply with the result of negotiation, either party may request for dispute settlement in accordance with the provisions under Circular No.40/2010/TT-BCT released by the MoIT in 2010 on procedures for resolution of disputes in the electricity market. It is noted that the dispute settling agency under Circular 40 refers to the Electricity Regulatory Authority of Vietnam under the MoIT.

This regulation is once again silent on whether parties can choose international arbitration as an alternative dispute resolution method. The model PPA provides for a mandatory choice of Vietnamese law as the governing law.

Furthermore, the model PPA under Circular 18 removes the regulations on the power seller’s right to choose to participate in the electricity market; and the concept of “competitive electricity market” under the trust, transfer, and restructuring provision.

Specifically, past model PPAs for grid-connected projects under Circular 16 gave a right to the power seller to either choose to continue the signed PPA for the rest of its term or choose to enter into a competitive power market which will lead to termination of the signed PPA. Since the aforementioned right is extinguished under the model PPA, the risk for the power seller may be elevated as they have no clear recourse for the change in laws that could affect the project in the future.

Circular 18 shares the same approach with Circular 16 on limiting the room for relevant parties to amend the model PPA. Specifically, parties are allowed to revise contents of the model PPA in order to clarify their responsibilities and obligations without altering the basic structure of the model PPA.

The responsibilities on clearance and return of the site, meanwhile, are still on the seller under Article 8.2 of Circular 18, though it is no longer stated under the model PPA.

Investors should take this into account while budgeting for the project. This condition follows international practices and ensures the reinstatement of the state property after completion of the project term.

The power that the seller receives from the power purchaser’s grid shall be agreed and signed under a separate PPA which is not under the scope of the model PPA for rooftop solar. We note that it is in compliance with the rooftop solar policies and eliminates the issue which occurred in the past when Vietnam followed net-metering scheme and applied model PPA under the MoIT’s Circular 16 which was later amended by Circular No.05/2019/TT-BCT.

The model PPA for rooftop solar regulates on the VAT calculation method, which is a new development comparing to the past regulation (that is, Circular 16 and Circular 5). This regulation is included to avoid issues relating to VAT applicability.

The model PPA for rooftop solar power projects regulates the procedure for payment in case of metering system breakdown due to fire, failure, loss or improper operation.

In terms of payment, the model PPA for rooftop solar power projects provides new regulations on the documents required during the payment procedure for the power seller and the power purchaser.

Specifically, different payment documents are required for different subjects (that is, payment document in case the power seller is an enterprise issuing monthly invoices; payment in case power seller is an organisation or an individual not issuing monthly invoices). This is a new provision comparing to the past regulation (that is, Circular 16).

Finally, the late payment model means the model PPA lets parties decide on late payment interest in accordance with the Law on Commerce 2005 and ensuring of the legal rights of the power seller. 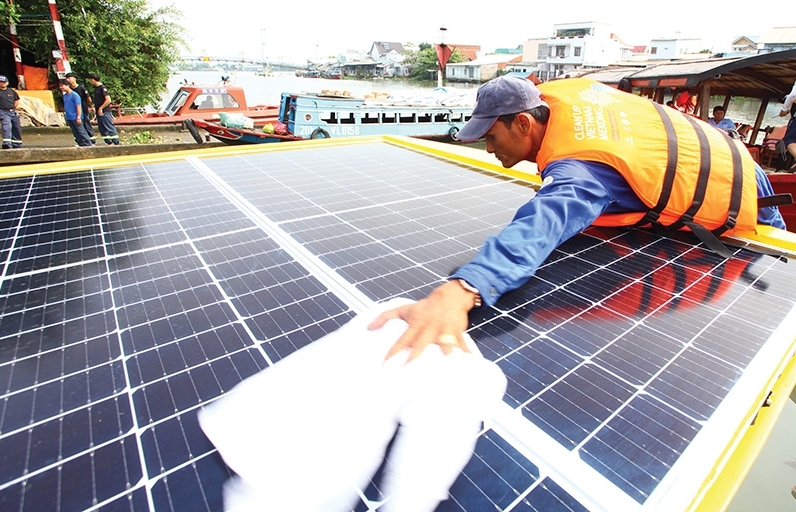 Methods to achieve growth in tandem with energy goals