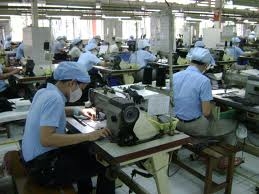 Many said that the sector was appealing to global investors involved in the production of fibres, which could enable Vietnam to have a larger stake in the industry’s global value chain.

“If two sides reach an agreement, later this year our group will team up with Vinatex to develop an integrated manufacturing system to produce wood powder and viscose fibre to feed Vietnam’s textile and garment industry,” a Lenzing Group source said.

According to Vinatex, Untersperger came to Vietnam twice in the recent months, showing the Austrian group’s commitment to step up the project progress.

Lenzing’s interest is not unique. In later part of December 2012, the textile and garment sector attracted numerous foreign firms interested in exploring connections with Vinatex in production of material and accessories projects.

Vietnam is an ideal place to apply a vertical production model that Lenzing Group has been practicing in Austria over the past 75 years, according to Untersperger.

According to a Vinatex source, the two sides came to an agreement on building a $120 million fibre production plant on 20 hectares site in northern Nam Dinh province’s Bao Minh Industrial Zone. The plant will have an annual production capacity of 50,000 spindles.

Under this project, the fibre made in the plant will be top-of-the-line used in the production of high value-added textile and garment products.

Both Vinatex and Itochu Group are now in legal stage with plans to start construction of the Nam Dinh plant in the middle 2013.

According to the Ministry of Industry and Trade, the textile and garment sector   has grown into a leading hard currency earners for Vietnam in the recent years.

In 2012, Vietnam reportedly earned $17 billion from exporting textile and garment products with the sum of $1.8 billion coming from yarn and fibre exports.

However, the sector’s total import value was also big at $11.3 billion last year. Of this, $1.4 billion came from importing yarns and fibres and $2 billion from accessories, reflecting sourcing input materials overseas remains a big hurdle despite the sector’s robust export growth.