September 17, 2021 | 12:57
Tweet Email Print
Supply chain cracks and labour shortages are costing businesses more than ever before and production network disruptions are set to occur more frequently – and with the world more interconnected than ever, such disruption is more likely to affect everyone from coffee-loving office workers to schoolchildren in need of a fizzy drink.

The UK media finally picked up on the troubles surrounding COVID-19 in Southeast Asia at the start of September, but not to cover tightened restrictions and snowballing case numbers - rather, it was concern for how it would damage the British population’s ability to enjoy a coffee before commuting to work each day.

The tough anti-pandemic measures induced in Ho Chi Minh City, its surrounding areas, and also in the Central Highlands region have disrupted supply chains after Vietnam, the world’s second-biggest exporter of coffee, continued to battle increasing infections since the latest and biggest wave emerged in June.

Vietnam is the leading exporter of Robusta coffee, used for instant coffee as well as for some espresso blends. The sharp rise in coronavirus cases and a shortage of vaccines have caused the government to impose travel curbs in producing areas.

British channels such as BBC News and GB News relayed the details to their viewers, inviting comment on how Brits would be able to cope with a shortage of coffee - in a country which is already suffering from critical supply chain cracks itself due to its complicated break-up with the European Union.

Consumers in the UK commonly drink two cups of coffee a day according to Germany’s market research firm Statista, and a tenth of drinkers enjoy as much as six or more cups on a daily basis. In total, Brits spent about £3.5 billion ($4.15 billion) on coffee, tea, and cocoa in 2019.

The Vietnam Coffee-Cocoa Association (VICOFA) urged the government a fortnight ago to ease restrictions after traders were reportedly struggling to transport beans to ports for export amid the restrictions. Last week a new travel permit system was set up in Vietnam’s major cities in an attempt to somewhat advance towards a gradual reopening of highly-populated areas, providing infections stay low and vaccination rates continue to increase.

Responding to calls from the VICOFA, Minister of Transport Nguyen Van The told officials in the south to reduce unnecessary administrative hurdles to ensure the smooth transport of agricultural goods such as coffee and rice.

The ongoing COVID-19 outbreak in Vietnam, which provided more than 20 per cent of the EU’s coffee imports in 2019, is contributing to what analysts describe as a perfect storm in the global coffee market.

Brazil, the world’s biggest coffee producer, has had unseasonable weather that has damaged crops and led to a rise in the cost of beans.

Ibi Idoniboye, a senior market analyst for Mintec, said, “For the 2021-22 crop, currently harvesting, there was a lot of drought so you’re already seeing lower production.”

The 2022-23 crops, to be harvested next year, have also been hit by frost. Local reports claimed that the damage was so severe that some Brazilian coffee farmers may need to replant trees, meaning it could take them “up to three years to resume production,” according to the BBC.

Brazil’s bean exports are primarily the premium Arabica, with some Robusta. The price of the two varieties has risen to multi-year highs, said Idoniboye. But it is unlikely that consumers will notice any immediate increase in the cost of a cup of coffee since most suppliers have contracts that are locked in for six months. “The next few months are going to be the most important,” he said.

While many roasters have such hedging agreements in place insulating them from coffee price fluctuations, analysts have started downgrading profit forecasts for some companies. Some groups such as Starbucks, which has a presence in Vietnam, have long-term hedging contracts and will not feel the effects of the higher prices in the international commodity markets. At the end of July, Starbucks said it had locked in its coffee price through to the following financial year.

Over 2.25 billion cups of coffee are consumed worldwide daily, making it one of the world’s most widely consumed beverages.

“While more than 90 per cent of the world’s coffee supply comes from developing countries, the top consumers of coffee are industrialised economies,” noted a report from small-cap investor analysts Dear Retail. “Because coffee can only grow in specific climates, the countries that consume the most coffee must import it from the places that can grow them naturally, such as Brazil, Colombia, and Vietnam.”

But while a global shortage of shipping containers, forecast to last until 2022, and rising fuel prices, has contributed to surging shipping costs, consumption rates of a product such as coffee is increasing – even in China, which has one of the lowest rates.

“Coffee consumption rates in China are growing quickly at 30 per cent per year compared to the rest of the world’s 2 per cent per year, meaning that Chinese demand for the commodity is also rising and could increasingly impact global supplies in the future,” the report warned.

The likely increase in coffee prices long-term is adding to global food price woes in general. Many consumers are struggling financially as a result of the pandemic – by the end of 2020, 700,000 people in the UK alone had been plunged into hardship, reported The Big Issue. Since then, the situation has worsened, and the United Nations food agency’s index of world food prices for July 2021 showed an astonishing on-year rise of 31 per cent, according to Reuters.

As if trade difficulties and general costs were not enough, a severe lack of workers is another hurdle many are having to overcome. Whether it is fruit pickers, lorry drivers, or waitresses, the globe’s food ecosystem is struggling due to a shortage of staff.

In Vietnam, the armed forces are assisting with the rice harvest. In the UK, farmers are dumping milk as there are no drivers to collect it. And American meat-packers are trying to entice new workers with Apple products while fast-food chains increase the prices of burgers and burritos.

The pandemic has helped spark a labour shortfall for many parts of the economy, and the impact is particularly stark in food and agriculture, which are among the world’s least-automated industries. Food security is a sensitive issue in many parts of the world and thin margins mean rising costs generally pass through to buyers, according to Boston Consulting Group (BCG).

“Almost certainly there is disruption,” said Decker Walker, BCG’s agribusiness expert based in Chicago. “Effects vary among locations and products, but “the general theme seems to be that the roles with the least desirable working conditions are actually the ones that we have the most pain with.”

Shortages are hitting farms, processors, and restaurants alike, especially in Southeast Asia. Malaysia, the world’s second-biggest palm oil producer, has lost about 30 per cent of the potential output of the edible oil used in everything from chocolate to butter. Shrimp production in southern Vietnam has dropped by 60-70 per cent from before the pandemic. And in Europe, a fifth of tomato production in the south of Italy has been lost this year due to the searing heat and transport issues, according to the Italian farmers’ association CIA.

The issue will not disappear when the pandemic ends: the share of workers employed in agriculture has been falling for decades amid a shift to cities and services sectors, and hiring for some jobs was tough long before the pandemic, reported Bloomberg. These more permanent changes to the labour market call for technological solutions, and investment in automation and robotics has accelerated during the pandemic.

In the United States, automated tractors, robotic milkers, and machines such as carrot planters are replacing human labour. Meanwhile, British farmers are trialling robots to pick strawberries, lettuce, and broccoli. Harvesting tools have helped Brazil’s Robusta farmers cut dependence on manual workers to one-fifth of the number needed just a few years ago, and while the country’s labour shortfall extended the length of the harvest, experts said technology has lessened its impact. Brazilian solutions are something that Vietnam may look to or take aspects from to ensure its future in the same sector.

As it stands, consumers are the ones losing out due to the current problems, noted more than ever thanks to social media. Even in Europe, where the pandemic is having less of an impact compared to Southeast Asia, a delivery crisis is taking hold. McDonald’s, Nando’s, Costa Coffee, and KFC have all warned customers of certain products being out of stock, while major supermarkets in the UK such as Tesco and Asda have been left with empty shelves as food shortages hit Britain, documented in tweets and Facebook posts.

Co-Op’s chief executive, Steve Murrells, described the current food shortage crisis as being at the “worst level” he has ever seen.

Even world-famous names like Coca-Cola are being affected. Its bottling business for the UK and Europe has said its supply chain has come under pressure from a “shortage of aluminium cans”.

New research from McKinsey Global Institute has painted the grim picture that a major rebalancing act is required for many companies in goods-producing value chains as they seek to get a handle on not only ongoing business challenges, but more profound shocks such as financial crises, terrorism, extreme weather, and future pandemics. “Intricate production networks were designed for efficiency, cost, and proximity to markets but not necessarily for transparency or resilience, but now they are operating in a world where disruptions are regular occurrences,” the August report said. “Averaging across industries, businesses can expect supply chain disruptions lasting a month or longer to occur every 3.7 years, and the most severe events will take a major financial toll.”

Around 40 weather disasters in 2019 caused global damages exceeding $1 billion each and in recent years, the economic toll caused by the most extreme events has escalated.

“As a new multipolar world takes shape, we are seeing more trade disputes, higher tariffs, and broader geopolitical uncertainty,” the report continued. “Almost 80 per cent of trade involves nations with declining political stability scores, and increased reliance on digital systems increases exposure to a wide variety of cyberattacks. The number of new ransomware variations alone doubled from 2018 to 2019.”

“As a result of this, interconnected supply chains and global flows of data, finance, and people offer more “surface area” for risk to penetrate, and ripple effects can travel across these network structures rapidly,” the report explained. 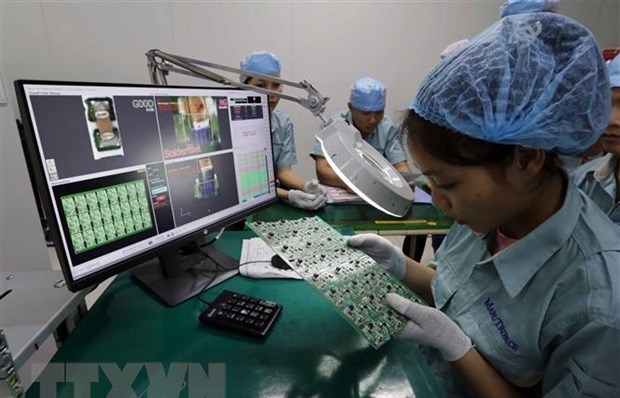