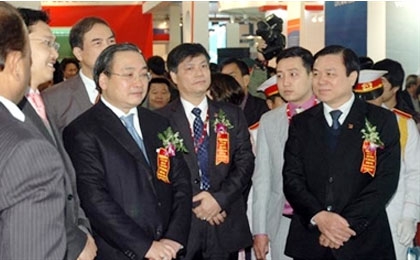 He made this statement on February 28 at the opening of the sixth International Exhibition of Shipbuilding, Marine Technology, and Transportation (VietShip 2012) in Hanoi.

The Government has created a programme to overcome these challenges, restructure the country’s shipbuilding industry and devise a strategy to develop maritime transport in the future.

Accordingly to the plan, Vietnam will restructure shipbuilding businesses and create a healthy financial environment for them.

The Deputy PM said he hopes that international shipbuilders will become more involved in the restructuring to develop an advanced shipbuilding and maritime industry.

He emphasized that if all the countries cooperate, the global economy will see a strong recovery and the shipbuilding and maritime industries will bounce back quickly.

Vietship 2012 has attracted many international groups from advanced shipbuilders such as Japan, the Republic of Korea, China, Poland, the Netherlands, France, Switzerland, Norway, Singapore, Russia and Spain.

The expo features showrooms of the world’s latest maritime technologies and equipment. Several seminars and forums on the future of the shipbuilding industry will be held during the event, which is open until March 1.

Vinashin works way out of trouble