March 09, 2015 | 07:30
Tweet Email Print
Within just a few years of establishing her business, Thai Huong – general director of BAC A BANK and chairwoman of TH Group – has made herself a Forbes-recognised Asian businesswoman and has turned her dairy farming and fresh milk processing plant into an Asian record-breaker well known for its TH true MILK brand. Writes Thanh Tung. 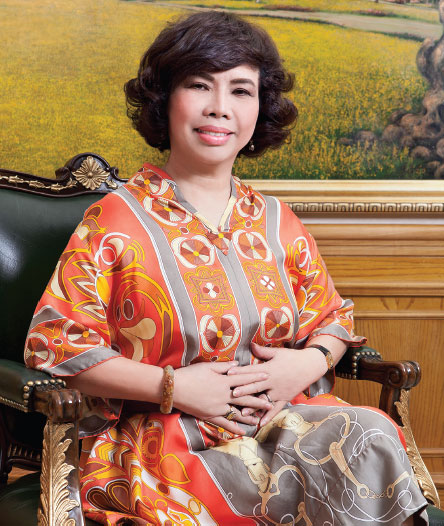 Thai Huong is an enigmatic character, known both for being a titan of Vietnam’s dairy industry, as well as her reticence when it comes to her business dealings or her private life.

“Our big success has come from many factors, but to put it briefly it is the result of brainpower, natural resources, and innovative technology,” Huong told VIR. “It is not so difficult to be a winner. But it is very difficult to maintain and develop on that success.”

Entering business in 1994, she founded BAC A BANK, which also acts as an investment and financial consultant for her own TH Group’s $1.2 billion hi-tech dairy and fresh milk processing project in the northern central province of Nghe An. Notably, this project is the most advanced of its kind in Asia.

Early last month, Huong was named by US business magazine Forbes as one of the 50 most powerful businesswomen in Asia, making her Vietnam’s newest representative on the list.

“In 2009, Huong entered the milk business, vowing to change the nature of the industry in Vietnam, which mainly uses powder to produce liquid milk,” said Forbes in its overview of Asia’s Most Powerful Businesswomen for 2015.

Since then her TH Group has invested $450 million on importing and raising cattle to produce fresh milk products, using Israeli technology. It has a head of 45,000 cattle grazing on 8,100 hectares, but plans to raise the total pastured area to 37,000 hectares.

TH Group estimates its 2014 revenue to have exceeded $200 million, with the firm holding a third of the fresh-milk market, a challenge to the country’s biggest milk producer Vinamilk, according to the Forbes report.

The list of Asia’s Most Powerful Businesswomen for 2015 covers the top 50 representatives in several sectors from 16 regional countries.

To compile this year’s list, Forbes judged company sales, the positions of the candidates in their companies, and the level of their participation at work.

“I feel so proud to have made a contribution to people’s lives,” Huong said, with no small degree of modesty. “However, I think this pride must be shared by my staff who have made great efforts to create pure fresh milk for Vietnamese people, and to gradually turn our dream of improving people’s health into a reality.”

“If BMW is symbolic of Germany, and Sony for Japan, then I would like to see TH true MILK as representing Vietnam,” she humbly suggested.

TH true MILK is strongly promoted through its modern branding

On February 10, the Asian Record Organisation in India sent an official letter to Huong, informing her that the TH farm had been recognised as “The biggest hi-tech dairy cow farm in Asia”.

A ceremony to receive the organisation’s certificate will be held at the farm next month.

“This is a historic milestone and very good news for Vietnam’s agricultural sector and dairy sector, and also for Nghe An and TH Group as well,” Huong said proudly.

Established in October 2009, the $1.2 billion project with a state-of-the-art cattle farm and a fresh milk production plant currently has 45,000 dairy cows, 22,000 of which are milked, and capacity of 400 tonnes of fresh milk a day.

Before the project was implemented, 92 per cent of Vietnam’s milk was imported from abroad. Now the rate has been reduced to 72 per cent, thanks to TH’s contributions.

Processing and packaging chains are monitored by state-of-the-art technologies including Siemens, Danfoss, and Grundfoss.

When Israeli President Shimon Peres paid an official visit to Vietnam in November 2011, he also held a meeting with Huong. While drinking TH milk, he praised the project, stating that “The glass of Israeli milk has global quality and TH’s glass of milk made by Israeli technology also has global quality.”

During a recent visit to the project, National Assembly Deputy Chairman Uong Chu Luu commented that “The project is a typical model in agricultural hi-tech application. It helps policy makers to know what to do to further develop Vietnam’s agriculture and make new policies for national development.”

Huong summed up her philosophy by saying that “it is quite necessary to produce fresh milk under international standards for Vietnam. This is also a good solution to improve Vietnamese people’s mental and physical well-being, and also help reduce the trade deficit for the local milk sector.”

Huong has been dismissed as “presumptuous” when she claimed TH true MILK products “face no rivals”.

However, she tried to explain that “It is my message to consumers and milk producers marketing low-quality products.”

According to her, a large part of imported milk materials come from many sources, both good and bad. Recently, 50 per cent of milk producers in China had their business licences revoked due to marketing low-quality products.

“I would say I face no rival, because I am taking my own road. In my project, we cultivate grass, raise cattle, and import modern technology to make fresh and clean milk with a premium standard of quality. No materials are imported,” she continued. She went on to explain that products made from powdered milk “is quite different from those made from pure fresh milk.”

“We hope that TH will develop into a major group in the Southeast Asian region, and many more projects like this will be developed in Vietnam,” he said.