November 30, 2015 | 20:07
Tweet Email Print
As investment in agricultural production increases in popularity in tandem with the country’s deeper economic integration, local firm Loc Troi Group has committed to developing a comprehensive rice value chain on par with the growing demand. 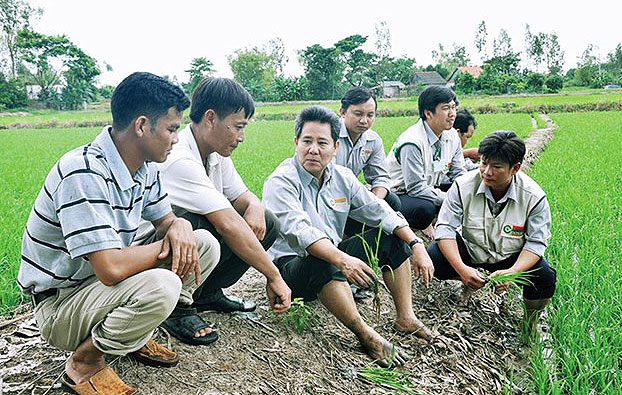 Recently, Loc Troi is the first agriculture firm in Vietnam joined the Sustainable Rice Platform with the commitment to working with farmers to pioneer sustainable rice production and boost the quality of the country’s rice exports.

Some 22 years ago, An Giang Plant Protection Joint Stock Company (AGPPS), the former name of Loc Troi Group, started up its agricultural chemical business and subsequently established a value chain – from research to production – for various farming products including rice and coffee.

In addition to developing its food processing capabilities, the group has become a leading producer and supplier of seeds, plant protection products, organic produce, and valued-added rice varieties. In August, the company announced its new identity which represented the firm’s new and diversified development strategy.

According to Nguyen Minh Nhi, former Chairman of the An Giang’s People Committee, the group’s growth and name change sits well alongside the trend of a more sustainable agricultural value chain in Vietnam. “Consumers in general want safer products, and so does the entire world,” he stressed.

In 2014, AGPPS’s revenue totalled VND8.84 trillion ($405.5 million), in which the proceeds from rice accounted for 22.6 per cent, or almost VND2 trillion ($91.7 million). This year, that figure is expected to reach as high as VND3 trillion ($137.6 million). Each and every rice grain produced by the group strictly follows a closed value chain from the sourcing of seeds, to the planting, harvesting, processing and distribution of the final products. AGPPS’s or Loc Troi’s rice has been exported to more than 30 countries around the world, including Japan – a country with particularly stringent standards on its imported rice products.

Loc Troi currently has five modern rice processing plants, and works closely with over 40,000 households who are taking part in the production of high-quality rice products. The company is also a leading producer and supplier of other quality and safe farming produce, which will satisfy both local and international consumers for years to come.

Tran Tien Khai, a Fulbright expert, during a recent forum on agriculture investment, said that forming a value chain in the agriculture sector was crucial for local farmers and the sustainable agricultural development of Vietnam, especially as various free trade agreements had been signed and the country would integrate further into the global economy.

“In the next 10 years, taking up from the sustainable value chain established for rice, we may well be building up the sustainable supply chain for the coffee, tea, pepper, and fruits, depending on the market needs. However, our core value will always remain with the rice paddies and the orchards,” noted Thon.

By By Tay Lan