March 12, 2014 | 10:12 (0) user say
Tweet Email Print
Ukraine's acting president said Tuesday the country would not use its army to stop Crimea from seceding, the latest sign that a Russian annexation of the strategic peninsula may be imminent. 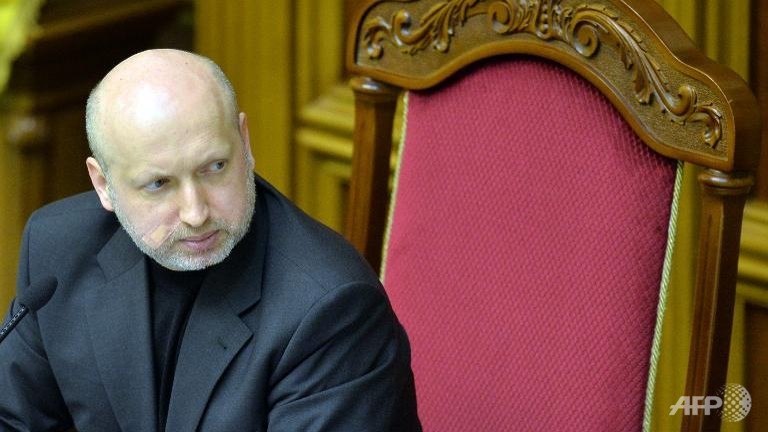 KIEV: Ukraine's acting president said Tuesday the country would not use its army to stop Crimea from seceding, the latest sign that a Russian annexation of the strategic peninsula may be imminent.

Oleksandr Turchynov's comments came after the Crimean parliament voted for independence ahead of a Sunday referendum on joining Russia, while Washington and Moscow locked horns in one of their fiercest clashes since the Cold War.

The interim leader said intervening on the southeastern Black Sea peninsula, where Kremlin-backed forces have seized de facto control, would leave Ukraine exposed on its eastern border, close to Russia.

"We cannot launch a military operation in Crimea, as we would expose the eastern border and Ukraine would not be protected," Turchynov told AFP.

Describing the secession vote as a "sham", he said: "What they call the referendum will not happen in Crimea but in the offices of the Kremlin."

World powers have repeatedly called for Moscow and Kiev to come together to seek a solution to the escalating crisis in Crimea, but Turchynov said Russia's leaders were refusing any dialogue with their Ukrainian counterparts.

"Unfortunately, for now Russia is rejecting a diplomatic solution to the conflict," he said.

"They are refusing all contact at foreign ministry and top government level," he added, as Western powers, led by Germany, continued to push for the creation of a contact group to avert full-fledged war.

Turchynov and his government's hold on the separatist region loosened still further when pro-Kremlin gunmen seized the air traffic control tower at Crimea's main international airport Tuesday and cancelled all flights except those to and from Moscow.

The latest escalation in the crisis also saw Moscow lash out at Washington for promising "illegal" financial assistance to Kiev's new leaders, who rose to power on the back of three months of deadly protests that toppled a Russia-friendly regime.

Undeterred, the European Union announced trade breaks worth 500 million euros ($690 million) Tuesday that could ease Ukraine's burden from restrictions that Russia has threatened in response to Kiev's tilt toward the West.

Crimea has been a tinderbox since Moscow's forces grabbed control of the peninsula -- home to tsarist and Kremlin navies for nearly 250 years -- as part of President Vladimir Putin's broader vow to "protect" ethnic Russians living in the southeastern swathes of the culturally fractured ex-Soviet state.

The region's self-declared rulers are now recruiting volunteers to fight Ukrainian soldiers, while the Russian government sent lawmakers a draft bill that would simplify the Kremlin's annexation of Crimea after Sunday's vote.

The deep historic divide in the nation of 46 million became ever more apparent as Ukraine's political crisis unfolded following the ousted leadership's rejection in November of a historic EU pact in favour of better relations with the Kremlin.

But the first region to take the radical step of breaking away from Ukraine was Crimea -- a peninsula of two million people that had always enjoyed wide autonomy and was a part of Russia until being handed over as a symbolic "gift" to Kiev when it was still a part of the Soviet Union in 1954.

US Secretary of State John Kerry meanwhile turned down a visit to Russia and a possible meeting with Putin in a diplomatic rebuff of immense proportions that enraged Kremlin officials.

The threat of Ukraine's imminent breakup has made the tensions and mistrust that always seem to cloud Russia-US ties ever more explicit and potentially damaging for the two powers' long-term relationship.

The rifts were exposed yet again on Monday when Russian state television took the unusual step of airing details of a meeting between Putin and Sergei Lavrov in which the foreign minister complained of Kerry's rebuff.

The broadcast of the exchange appeared clearly aimed at putting the pressure back on Washington and painting US officials as unwilling to discuss their support for an interim team in Kiev that Putin says claimed power through "an illegitimate coup".

The US State Department did little to relieve the tension by reporting that Kerry held telephone talks with Lavrov on Tuesday in which the Russian diplomat "stated positions that we heard" before.

It added that Washington wanted to keep the dialogue with Moscow as a matter of principle.

But "the environment has to be right and the goal must be to protect the immunity and sovereignty of Ukraine," State Department spokeswoman Jen Psaki said.

The US Congress demanded Tuesday that Russia immediately withdraw from Ukraine and urged US President Barack Obama to impose punitive economic sanctions on Moscow.

The Senate expressed its support for Ukraine by passing strongly worded resolutions, using tough language against Russia and urging it be suspended from the Group of 8 world powers.

The measure also called on world football's governing body FIFA to reconsider its decision to hold the 2018 World Cup in Russia.

The latest bitter and unusually public row came a day before Ukrainian Prime Minister Arseniy Yatsenyuk headed to the White House for a Wednesday meeting with Obama that should add credibility to his untested team.

Yatsenyuk will also use the chance to iron out the details of a $35 billion aid package he says his nation's teetering economy needs to stay afloat over the coming two years after being mismanaged by president Viktor Yanukovych -- now living in self-imposed exile in Russia.

The White House said Obama would discuss an economic support package that has already seen Washington pledge more than $1 billion and the European Union 11 billion euros over two years.